[30 YEARS OF INDEPENDENT SLOVENIA] WHAT DID WE LISTEN TO 30 YEARS AGO?

When the Slovenian spring was awakening, domestic music was instilling optimism and strengthened national consciousness. At the time of Slovenian independence, evergreen hits were created and they are still played on radio station programs even today.

30 years ago, with the independence of the country, the Slovenian culture and music scene also became independent. The communist regime and its accompanying repression had stifled freedom of expression, even in music. Musicians who expressed disagreement with the authorities through their lyrics were quickly silenced or even punished. At the end of the 1980s and the beginning of the 1990s, when the Slovenian spring was awakening, Slovenian music instilled optimism, hope, and strengthened national consciousness and love for the Slovenian identity. Undoubtedly, the leading Slovenian musicians were Ansambel bratov Avsenik (the Avsenik Brothers Ensemble); with them, Slovenian (especially folk) music became recognizable all over the world.

The Avsenik brothers were preserving the national identity

In the article “Music and National Consciousness” the historian Stane Granda wrote that they were the ones who were preserving the national identity, although they had some songs in German. “In 1990, they also showed their political-democratic affiliation quite unequivocally. This is also demonstrated by the confrontation contained in their music, performed by supporters of the multiethnicity of Slovenian culture, supporters of the non-national pop culture, who have declared it to be so-called ‘beef music’ and are pushing it out of public life in all possible ways, especially with ridicule. They often describe the performance of this music as a manifestation of Slovenian primitive subalpine nationalism,” wrote Stane Granda.

In the early 1990s, Slovenians increasingly listened to domestic, Slovenian music; not only folk music (the so-called Oberkrainer music), which was flourishing, but also other, “modern” genres, such as pop and rock. The music of the former common state became less and less popular, Slovenian radio stations were occupied by the then leading Slovenian pop musicians, who are often still heard today. One of them was the band called Martin Krpan, which performed as a support act for the legendary Bob Dylan at the Bežigrad Stadium just a few days before independence. Although they played the last concert of their joint career at the time, they have remained influential and popular to this day. 1X Band is also a band that has made history in Slovenian music, as they were the first to represent Slovenia at Eurovision, and their song “Tih deževen dan” (Silent Rainy Day) became an evergreen. The band Agropop was also popular at the time of independence, especially because of the patriotism they expressed through the songs “Samo milijon nas je” (There Are Only a Million of Us) and “Misliš, da sem seksi?” (Do You Think I’m Sexy?). In addition, we must not forget the band called Pop Design, which in the summer of 1991 with the big hit “Ne bom ti lagal” (I will not lie to you) reigned on radio stations. After exceptional success on the Slovenian music scene, the members of the band went to the USA and recorded an English version entitled “Dreams”. Among the most played bands and singers were also Don Mentony Band, Laibach, Panda, Andrej Šifrer, Nace Junkar, Lačni Franz, Andrej Šifrer, Chateau and Helena Blagne. 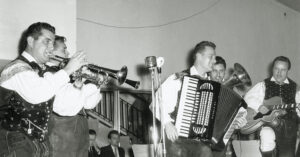 Survey: Environment not factor in choosing means of transport

By: P.T., STA A survey on Slovenia's energy efficiency (Reus) has shown that 25% of households are considering using public transport such as city bus...
Read more
Culture

Impossible Figures and Other Stories I wins Animateka’s main prize

By: J.S., STA The Jury Grand Prix of the 18th Animateka international animated film festival was conferred on Impossible Figures and Other Stories I by...
Read more
Slovenia

By: J.S., STA Fraport Slovenija's managing director Babett Stapel, who took over at the helm of the company operating Ljubljana's international airport in October, is...
Read more
Slovenia