Women who call themselves women are sexist! 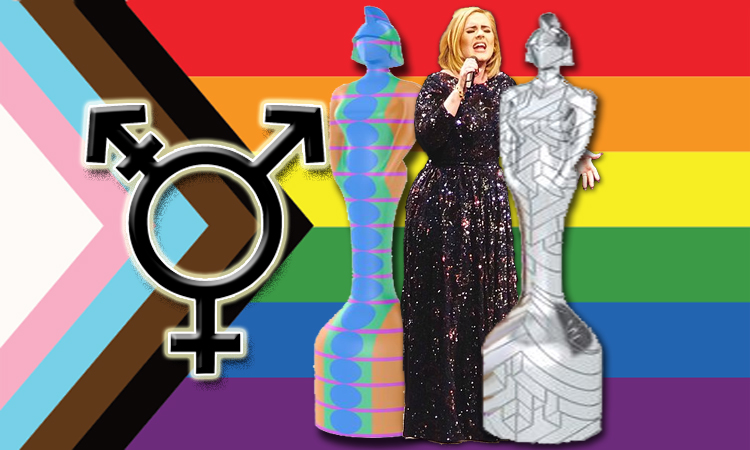 It is well known that men, male-like, diverse or other non-childbearing persons who refer to menstruating persons as “women” (a word that is now as pejorative as “mother” instead of “carrying parent”) are despicable sexists. Just like anyone who uses the evil N-word is racist.

It may not be so well known that menstruating persons who call themselves “women” in a macho way are sexists (or is that now called sexist or sexism practitioner?).

But now the singer Adele also had to make this experience and endure a shitstorm because of her openly expressed sexuality. On the occasion of the award ceremony at the Brit Award, the British artist 1.) as a “woman”. In addition, as a self-confessed woman who commented on the gender-neutral award for “Artist of the Year” with the words “I love to be a woman“. And thus expressed himself clearly sexist, especially for the ranks of those who have not yet decided on a gender.
The 33-year-old, who also sees herself as an artist (female! she said it female!), was able to win the three most important prizes: In addition to the gender-neutral award for the non-binary “Artist of the Year”, her comeback single “Easy on Me” was also awarded “Song of the Year” and the associated album “30” as “Album of the Year”.

Non-/Binary People: Laughter Instead of Gender

The trigger for the comment, which is causing such excitement in the “Woke” community, is the awarding of the Brit Awards as a gender-neutral prize after a gender-indecisive artist got upset about the categorization into male and female winners of the awards: In 2021, the “non-binary” musician Sam Smith felt excluded from the male and female categories. The organizer of the awards then felt compelled to abolish the categories and only offer a common prize for all genders and gender-like persons (art figures, or whatever someone wants to be). Which, in turn, should not go down so well with the artists who have already decided to be man or woman (like Adele), as the price chances have at least been halved.

On the occasion of her acceptance speech at London’s O2 Arena, Adele commented in front of the cheering crowd on the name change, which she could understand but sexist “she still loves to be a woman and artist”. Thus she was suddenly declared a “TERF” (= trans-exclusionary radical feminist) trans-exclusionary radical feminist, as the FAZ 2.) reported.

Even a bear kid is not a “young lady”

The diplomatic correspondent of the editor-in-chief of the Tagesspiegel, Christoph von Marschall, also had to learn that “women” should not be described in this way, i.e. gender-specifically – and certainly not as a “young lady” – but gender-neutral as a “menstruating person”. He had actually referred to the German foreign minister, menstruating person in an article as a “young lady” and for this he negotiated the godly shitstorm of the woken sexism guards. But that’s another story (to be continued) – (Transdanubian)

By: P.T., STA A total of 1,582 new cases of coronavirus were confirmed in Slovenia during the extended weekend and nine fatalities among Covid-19...
Read more
Slovenia

By: J.S., STA The UK energy and natural resources company Ascent Resources and its Slovenian subsidiary have formally submitted a request for arbitration against Slovenia...
Read more
World

By: J.S., STA Tatjana Rojc, the Italian senator and a member of the Slovenian minority in Italy, will headline the list of the Democratic Party...
Read more
Slovenia

By: P.T., STA President Borut Pahor underlined the importance of a strong community for a nation, especially in times of global turbulence, as he addressed...
Read more

By: J.S., STA Tatjana Rojc, the Italian senator and a member of the Slovenian minority in Italy, will headline the list of the Democratic Party...
Read more
World

By A. S. According to Remix News, sources in the British defence services have reportedly provided information to the British media that the RAF is...
Read more
Focus

Head Of The National Bureau Of Investigation, Darko Muženič, Has A Direct Connection To The News Show 24ur, Via Journalist Damjana Seme

By: Ana Horvat / Nova24TV In the past, we have already reported that the commercial television station POP TV is a mainstream media outlet where...
Read more
Focus

Journalists Switching To Politics: They Transfer Exclusively To Left-Wing Parties

By: Tanja Brkić / Nova24TV The new transfers from journalism to politics or to the ruling party, the Freedom Movement, have caused quite a stir...
Read more
Share
© © Nova obzorja d.o.o., 2021
Manage Cookie Consent
We use cookies to optimize our website and our service.
Manage options Manage services Manage vendors Read more about these purposes
View preferences
{title} {title} {title}
Go to mobile version