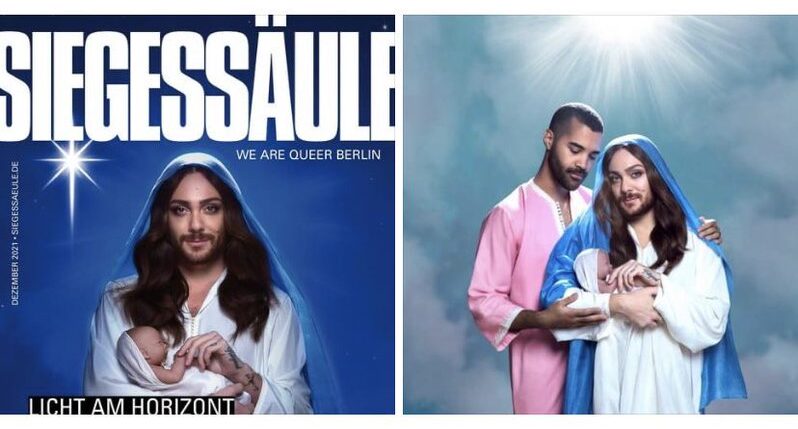 Just at Christmas time, the LGBTI community is once again speaking provocatively. In a Twitter post, the newly elected European “LGBTI ambassador” Riccardo Simonetti apparently wanted to promote his new role and the “highly acclaimed community”.

With highly provocative pictures that show him in the form of the Mother of God Mary with the Child Jesus and a (clearly) colored Joseph. The no less evocative text then reads as follows: “If we ignore the fact that Jesus was not white, we might as well believe that the Virgin Mary had a beard, why not?”

These days, Riccardo Simonetti has his own TV show, which supposedly set ratings records, is a bestselling author, popular TV face and one of the most photographed male celebrities in Germany. As an author, he has published various works, including one with the title “Mama ich bin schwul” (Mama I am gay), which is probably sobering for many parents.

Another of his literary “treats,” titled “Raffi and His Pink Tutu,” whose cover features an early pubescent boy with a baseball cap and pink tutu skirt, may have sent the LGBTI community to storms of enthusiasm. Subsequently, it will probably also have contributed significantly to his nomination as EU ambassador.

According to Simonetti’s own statements, this is probably the greatest honour he has ever received to have been appointed EU Special Envoy. “I take the responsibility that this function entails very seriously and hope to create even more visibility for a community that is so often on the margins of society,” Simonetti said.

This mainly includes monitoring the situation of lesbian, gay, bisexual, transgender and intersex (LCLIs) in EU Member States and beyond. Also the contact with civil society groups to present their concerns at European level.

So now there is also the highly provocative special ambassador Simonetti, who is not only highly provocative in the Christian sense, who has gladly accepted this, according to the already known pattern without doubt highly lucrative side job. He then expressed this joy in his tweet.

On the part of the Visegrad countries, there was understandably a hail of condemnations for this “provocative, insensitive and blasphemous contribution”. In the sense of the Christian values of Europe, which are still prevalent, such a provocation, especially in the run-up to Christmas, must be condemned in the strongest possible terms.

By UME With the abolition of §219a StBG, the SPD and its traffic light coalition legalize the advertising for industrial child murder and all left-wing politicians...
Read more
Sport

Over 40 athletes to represent Slovenia in Beijing

By: P.T., STA Slovenia will be fielding a total of 41 athletes at the upcoming Beijing Winter Olympics, a group featuring a number of established...
Read more
Slovenia

By: J.S., STA Roberta Metsola's election as European Parliament president was hailed by Slovenian MEPs from the ranks of her European family, the EPP, but...
Read more
Slovenia

By: J.S., STA Infrastructure Minister Jernej Vrtovec reiterated his promise that the state would help the coal-mining regions through transition as he responded to misgivings...
Read more

By UME With the abolition of §219a StBG, the SPD and its traffic light coalition legalize the advertising for industrial child murder and all left-wing politicians...
Read more
Editors picks

By: J.S.,STA The Ministry of Education, Science and Sport has introduced a separate quota for the enrolment of Slovenians without Slovenian citizenship in universities in...
Read more
Focus

Scandalous Attack of the Left Forces on Journalistic Freedom and Truth – They Are Going After Možina and Rebernik!

By: Sara Kovač / Nova24tv What is happening? Because of the episode of the show Utrip that I hosted, I have just received an invitation...
Read more
Focus

The Core of the Political Struggle in Slovenia Today Is the Slovenian National Character – What Does the Spiritual History of Slovenians Say About...

By: dr Teo Zor The real name for the events that happened in the years between 1941 and 1945 is the Slovenian catastrophe. This means...
Read more
Share
© © Nova obzorja d.o.o., 2021
Go to mobile version