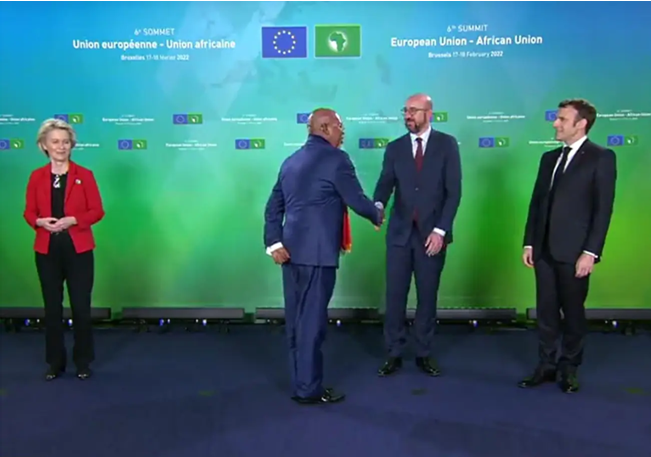 BRUSSELS – The scene is reminiscent of the “Sofagate” almost a year ago at the reception of EU leaders, Ursula von der Leyen and EU Council President Charles Michel, at Turkish President Recep Tayyip Erdogan in Ankara. While Michel was allowed to sit next to Erdogan in the chair, von der Leyen was banished to the sofa off the side. The bewildered head of the Commission could only react with an embarrassing “Ääääähm” when she realized that there was no chair for her.

This time she only grinned when Ugandan Foreign Minister Jeje Odongo was told by French President Macron during the welcome ceremony on the occasion of the EU-African Union summit to welcome von der Leyen after all. The handsome Moor then turned to the Commission President (see video below), but was far from shaking her hand.

That his appearance had been anything but a diplomatic misunderstanding, the Ugandan minister himself made clear via Twitter. In one post, Odongo writes only of the welcome by the Council President Michel and French President Macron. And von der Leyen, after all one of the most powerful politicians in Europe, was not worth mentioning. The photo that Odongo posted about it is also clear: Von der Leyen is simply not on it, although she was right next to it, reports the solothurnerzeitung.ch.

What will our feminists and other left-wing insiders say about this? They are probably in an ambivalent dilemma: On the one hand, the condescending treatment of a woman and, on the other hand, it would probably be “racist” to blame a black man. It is quite possible that a “working group” will now be formed to explore how a progressive politician has to behave “culturally sensitive” in such situations.

Best perhaps, and that would even be progressive, the respective lady disguises herself as a man! Just like Markus Ganserer as a woman, who now sits as Tessa on a women’s quota in the Bundestag, as our editors reported.

(VIDEO) Country that kills. The power of reason. Episode 2

Source: 1plus1TV The Russians scorn the security and laws of any country. The case of Skripals in Salisbury is very illustrative - one day in...
Read more
Important

By: Anita Gužvič / Nova24tv The Consultation of Slovenian Diplomats continued on Wednesday at Brdo pri Kranju. The aim was to outline the guidelines for...
Read more
Focus

(VIDEO) The secret of a little russian girl. The power of reason. Episode1

Source: 1plus1TV Today we're waiting for the utility bills. Should I expect the price increases because of the war Russia has started in the Eastern...
Read more
Share
© © Nova obzorja d.o.o., 2021
Manage Cookie Consent
We use cookies to optimize our website and our service.
Manage options Manage services Manage vendors Read more about these purposes
View preferences
{title} {title} {title}
Go to mobile version