(VIDEO) Watch the video, which exposes many lies, and was censored by the chairwoman of the debate on Slovenia!

»It is no secret that in Slovenia we have problems with the rule of law and also with the freedom of the media, but of course we look at these problems differently,« explained Prime Minister Janez Janša. He is convinced that those who talk the most about media freedom also violate it the most.

This was also shown in the debate itself, as the chairwoman Sophie in ‘t Veld did not allow the presentation of a video about the media scene in Slovenia, which is why Janša no longer wanted to participate in the debate. »Everything was agreed, prepared, translated and forwarded in a timely manner. It is simply a censorship of a body that is supposed to defend the freedom of the media. The real face of #EPJustice is sad,« commented Prime Minister Janša after the debate.

A debate on media freedom and the rule of law in Slovenia took place today in front of the The Democracy, Rule of Law and Fundamental Rights Monitoring Group in the European Parliament. Slovenian Prime Minister Janez Janša was also invited to the debate. He has personally been working since 1987 to get the European Parliament to debate the rule of law, freedom of the media and the state of democracy in Slovenia. »When we seceded from Yugoslavia, we needed such help the most at that time,« he stressed. He is convinced that in a way we need such a discussion even now, in fact we have needed it all this time of the Slovenian transition, which is still not complete. »It is no secret that in Slovenia we have problems with the rule of law and also with the freedom of the media, but of course we look at these problems differently,« he explained.

»What is an objective criterion is the facts,« he goes on to explain and welcomes the opening of this debate, hoping that this is not the last such debate, given that the problem is complex. »As representatives of the government, we are ready to cooperate at any time, just to have time for it. We also hope that the epidemic will end as soon as possible and that we will be able to discuss this directly.« He is convinced that long-distance discussions are difficult, and he hopes for a personal discussion as soon as possible and that there will be enough time for speeches and explanations without censorship. »I regret that we have received some warnings in recent hours in the sense that you have to personally approve what we are going to show here as a video,« he said critically, adding that he did not see this as a contribution to media freedom. 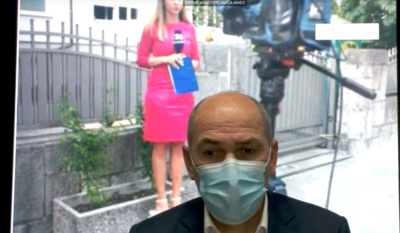 Unlike previous governments, Janša emphasizes that they do not want to hide anything and are willing to talk about anything. Anyone who thinks that there is a problem with the rule of law or freedom of the media in Slovenia wants to have the opportunity and enough time to present the other side as well. »And of course we invite everyone who thinks that anything is wrong – and many things are wrong – to come to Slovenia and get directly acquainted with the situation,« he called on MEPs. He is convinced that they need a week in Slovenia and a good translator to monitor the media and political events.

They did not want to play the video

»It will then be clear to every layman what is happening in Slovenia and that the picture is quite different from the one that was tried to be shown by some proposers,« he explained. He is aware that all this debate, which is taking place within the European Parliament, is dedicated to the internal political situation in Slovenia, and he doubts that anyone abroad is interested in this at all. »We want things to be judged objectively and, of course, for each institution to respect its responsibilities.« He then sent a video to MEPs, which actually testifies about the attacks on journalists and the attempted murder of a journalist in the past. »Unfortunately, those who have their mouths full about media freedom do not have such problems as journalists who were beaten almost to death,« he explained.

79 Intellectuals Have Written A Harsh Letter Against The Government’s Personnel Purges In Companies, Media And Cultural Institutions

By: Peter Jančič, Spletni časopis A harsh open letter against the government’s behaviour has been signed by 79 intellectuals. They had decided to send the...
Read more
Focus

By: Anita Gužvič / Nova24tv The Consultation of Slovenian Diplomats continued on Wednesday at Brdo pri Kranju. The aim was to outline the guidelines for...
Read more
Columnists

By: Davorin Kopše My call to Asta Vrečko to “get lost” is unique for a veteran of the war for Slovenia. While waiting for the...
Read more
Focus

Will Golob Deny This, Too? Gen-I Sponsored An Event Where The Kosovo Prime Minister Kurti Was Also A Guest

By: Tanja Brkić (Nova24tv) Prime Minister Robert Golob maintains that he does not know Martin Berishaj and denies all transactions that have taken place or...
Read more

79 Intellectuals Have Written A Harsh Letter Against The Government’s Personnel Purges In Companies, Media And Cultural Institutions

By: Peter Jančič, Spletni časopis A harsh open letter against the government’s behaviour has been signed by 79 intellectuals. They had decided to send the...
Read more
Focus

By: Anita Gužvič / Nova24tv The Consultation of Slovenian Diplomats continued on Wednesday at Brdo pri Kranju. The aim was to outline the guidelines for...
Read more
Important

The government increased the funding of STA by more than ten percent and it seems that it will also provide a new law on...

By: Lea Kalc Furlanič At last week’s meeting, the government approved the text of the contract on the public service of the Slovenian Press Agency...
Read more
Important

Janez Janša: “This Is Not Just About The Actions Of A Minister Who Cannot Rise To The Challenges Of Her Position, It Is Also...

By: Sara Kovač (Nova24tv) Even though everywhere else in the world, people are proud of their respective countries’ independence, and it would never even occur...
Read more
Share
© © Nova obzorja d.o.o., 2021
Manage Cookie Consent
We use cookies to optimize our website and our service.
Manage options Manage services Manage vendors Read more about these purposes
View preferences
{title} {title} {title}
Go to mobile version