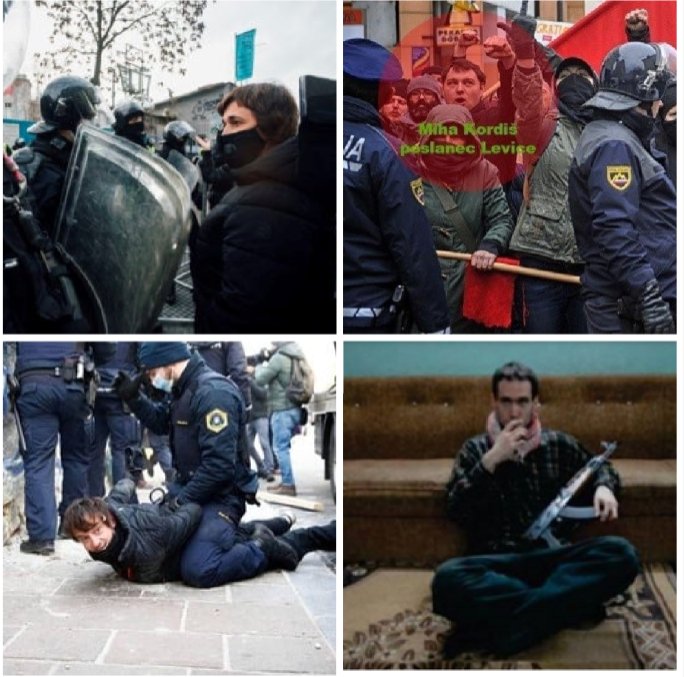 Extreme left wing extremist groups in Slovenia can be divided into three primary branches, which in themselves are distinguished by their intrinsic dogmatic beliefs. They all derive from Marxist-Leninist theories, they are connected by a kind of utopian sentiment after the anarchist order of society, which they repeatedly point out through their propaganda messages. They often destroy foreign and public property, physically deal with ideological opponents, and are violent in protests against the police. Their main goal is to overthrow the constitutional order of the Republic of Slovenia and the path to complete anarchy. They are willing to do anything to achieve their goals. Left wing extremists took part in violent protests, attacking police as well as journalists. These are dangerous individuals who are well organised and led by left wing political parties. Levica MPs often appear at their protests.

Anarchist and neo-Marxist groups defend the philosophical principle of anarchism, founded by a Russian political scientist Kropotkin in the early 1920s. They associate their activism with a dogmatic idea of revolution and the struggle of the working class. In Slovenia, anarchists mainly stay in Ljubljana, where they have three main organisations:

The main anarchist activists are: Andrej Pavlišič, Matevž Pistotnik and Urša Cocej, Magda Beganović, Miha Andrič, Žana Fabjan Blažič, Jaša Montani, Erik Valenčič, Jernej Polovšek, Aigul Hakimova. They are all long-time anarchist activists, more discreetly participating in cycling protests where they attacked police officers. Some of their members were arrested and detained. Levica MP Nataša Sukič is the main link between extreme anarchists and the Levica party. Sukič often participates in anarchist and Antifa roundtables. It is more than obvious that she is therefore cooperating with the terrorist group Antifa. The Levica MP, together with Antifa activists, is taking part in the protests and is giving instructions on how to fight against the government, and with what approaches to overthrow the current government. An e-mail circulating among anarchist thugs calls for protests against the “occupier”. Among the Antifa left extremists, Miha Kordiš, a member of the Levica party, was also noticed years ago. 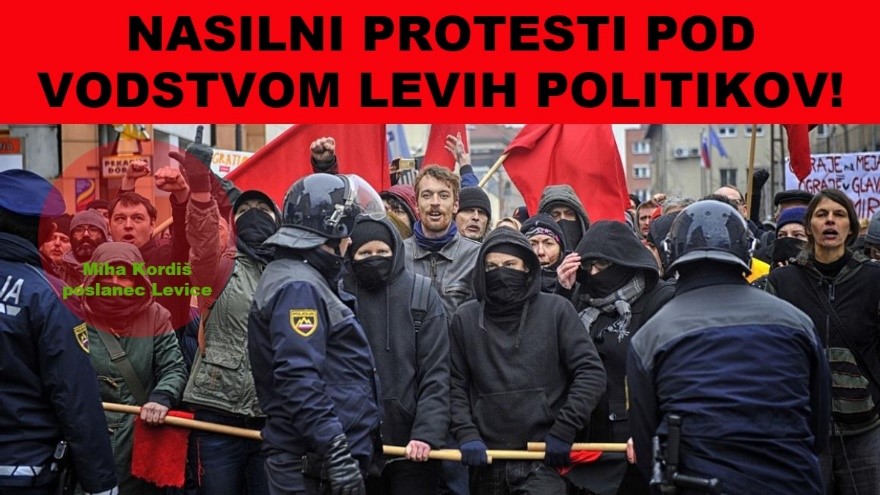 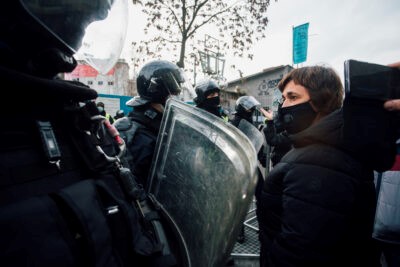 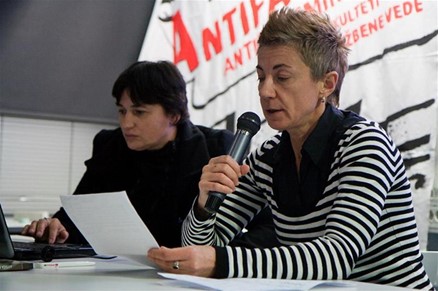 An important factor in Antifa is the anarchist Gorazd Grošelj, who, among other things, supports extreme separatist groups abroad: Rojava, PKK, PJAK and other resistance movements. Grošelj is a medical student who was tried on suspicion of committing a criminal offense of assault on an official, as well as on numerous pre-trial proceedings for false charges. According to reliable information, he was banned from entering the territory of Turkey and Israel, due to his acquaintances with Kurdish separatist and terrorist groups. He is connected with the journalist Erik Valenčič, who gives him instructions on the operation. In August 2020, Grošelj invited Antifa from Germany to help with the violent protests. Foreign Antifa groups are often present at anti-government protests, especially when police and journalists are violently attacked. 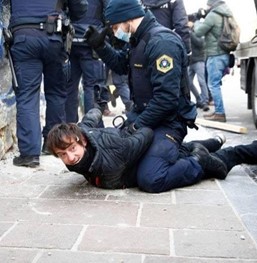 Youth organisations present themselves to the media and the public as non-dangerous and, above all, apathetic groups that strive to improve the situation of young people in Slovenia. However, it should be noted that the latter groups are extremely dangerous due to the radicalisation carried out by their mentors and members.

The following groups should be especially emphasised here:

The Youth Activist Organisation (MAO), the leader of which is the student Lars Podkrajšek, who is, among other things, active in many academic organisations. He is a supporter of extreme militant groups, especially the Kurdish Rojava and the PKK. Podkrajšek operates under the direct baton of Tea Jarc and the Levica party. The Youth Activist Organisation is striving to become the second student party “Iskra”, after their catastrophic break-up in the last five years. Podkrajšek has a direct connection and operational connection with Erik Valenčič and the Levica party. Valenčič is their ideological leader and adviser, as well as a direct link with the Kurdish separatists Rojava and the PKK. There is a video online where Valenčič explains that the separatists gave him an opportunity or reward to be able to shoot three people. There are also pictures where Erik Valenčič is photographed with a terrorist flag as well as a Kalashnikov rifle in his hand. Experts claim that Valenčič is said to be a strong link between terrorist cells from the Middle East and Slovenian far-left groups.

The MAO organisation often calls for the destruction of society and the state system of the Republic of Slovenia through its propaganda stickers, leaflets and posters. MAO strives to become a party within the Student Organisation of Slovenia. According to the testimony of the president of the Bežigrad High School Students’ Association, Simon Trusevich, the MAO is supposedly staffing intensively at Slovenian high schools. MAO also has a direct financial and operational link with Tea Jarc and the Mladi plus union, which are involved in Friday’s protests. “In an open letter, they also expressed support for Friday’s protests in the Mladi plus trade union,” the STA wrote. This same union is led by Jarc, for whom a connection has been established in the past with the Open Society Foundation of the billionaire that funds anti-state protesters, George Soros.

The young element in the Levica Party has a direct connection to the Iranian Revolutionary Guard Corps (IRGC). The chief liaison officer is Matjaž Razdrih, the son of the well-known Ljubljana lawyer Andrej Razdrih, who is banned from entering Israel for life. Despite the fact that the Levica party supports the ideas of the LGBT, it seeks to cooperate with the Iranian regime, due to Iranian geopolitical interests in the region. Urban Suhadolnik and Grega Ciglar, a former member of the Levica party, who is now active at the local level in Zoran Janković’s List party, are also active.

As already mentioned, the far-left extremists of the MAO are associating with foreign separatist groups from Iraq and Syria. They post pictures and videos on their social networks where they hold the Rojava and PKK flags in their hands, with which Valenčič connected them. Antifa members often invite members of foreign anarchist and extremist groups to their meetings. Foreign militant activists help their “comrades” in the anarchist revolution. Their goal is the creation of global anarchism, and the precondition is the overthrow of the government. 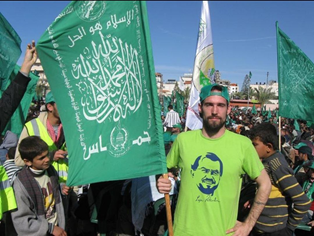 Erik Valenčič holds the flag of terrorists in his hands. (Photo: Social networks)

NGOs are also partly funded by the Soros Open Society Foundation, as well as by foreign secret services, which, for economic and geostrategic reasons, are advocating the overthrow of the current government. 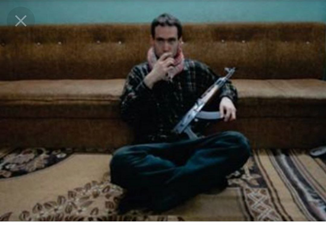 Farm to Fork Conference highlights the transition to sustainable agriculture

By: UKOM Minister of Agriculture, Forestry and Food Jože Podgoršek attended the Farm to Fork international conference via video conference. The event, which is taking...
Read more
Focus

Foreign ministers on the Gulf, the Eastern Partnership and the situation in Ethiopia and Nicaragua

By: Sara Kovač / Nova24tv SDS MP Jure Ferjan addressed a written parliamentary question to the Ministry of Justice, which refers to the increase of...
Read more
Important

(OPINION SURVEY) The SDS party has a 93.4% advantage over the second-ranked SD party in October; government parties gained 5.5 percentage points compared to...

By: Janja Strah If the parliamentary elections were held tomorrow, the SDS would get 20.7 percent of the vote (5.3 percentage points more than in...
Read more

Farm to Fork Conference highlights the transition to sustainable agriculture

By: UKOM Minister of Agriculture, Forestry and Food Jože Podgoršek attended the Farm to Fork international conference via video conference. The event, which is taking...
Read more
Focus

Foreign ministers on the Gulf, the Eastern Partnership and the situation in Ethiopia and Nicaragua

By: Sara Kovač / Nova24tv SDS MP Jure Ferjan addressed a written parliamentary question to the Ministry of Justice, which refers to the increase of...
Read more
Important

(OPINION SURVEY) The SDS party has a 93.4% advantage over the second-ranked SD party in October; government parties gained 5.5 percentage points compared to...

By: Janja Strah If the parliamentary elections were held tomorrow, the SDS would get 20.7 percent of the vote (5.3 percentage points more than in...
Read more
Share
© © Nova obzorja d.o.o., 2021