The agent of the deep state who also used to be an employee of the former secret political police – the State Security Administration (Uprava državne bezbednosti – hereinafter referred to as UDBA), Dragan Isajlović, has a lot of assets and property. We are sharing the exclusive photos of a luxury holiday apartment building at Pelinković 3 in Punat on the island of Krk in Croatia. In addition to the apartment building, Isajlović also owns a sailboat, with which he often goes sailing in the Adriatic Sea.

Dragan Isajlović is best known to the general public as a member of the State Security Administration, which arrested Janez Janša in 1988 for allegedly revealing a military secret. They also searched the premises of the publishing company Mikro Ada, where they were looking for a classified military document. After the fall of the communist system, he transformed from a defender of the former political system to an “entrepreneur.” Namely, Isajlović belonged to the group of former agents of the State Security Administration, who were channelling the money from the former secret funds of UDBA and other off-shore companies, into privatization deals. Janez Zemljarič was at the very top of the hierarchy, and to this day, he is still Isajlović’s “boss” and personal friend. Both of them have “created” enviable assets, at the expense of other people’s work and the agreeable economy.

Isajlović got a lot of attention when Pahor’s government took office, as he, to everyone’s surprise, became the adviser to the Minister of Finance, Franc Križanič, which caused quite a stir. After the Pahor government’s term ended, he withdrew to the safe haven of the transitional network of economic elites of the left but continued to appear in various suspicious state construction deals across Slovenia. 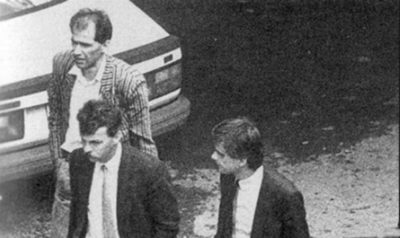 Janez Janša arrest with two Udba officers in 1988. One of them is Dragan Isajlović. (Foto: Tone Stojko)

He purchased the real estate through a Croatian company, which quickly went bankrupt
According to reliable sources, Isajlović was mainly able to afford the real estate in Croatia and the sailboat because of the business of building the Nordic Center Planica, which the central media in the hands of the left continue to praise. They like to write about how every Slovenian can be proud of the building of sports pride, under Ponce. But unfortunately, this is just a fairy-tale for the naïve. Our sources tell us that Isajović once bragged to his friends, saying that he earned more than 100 thousand euros for the project of building the Nordic Centre Planica.

He later invested some of this money in his Croatian resort and the sailboat. He allegedly did this through a company, established in Croatia, which then bought Isajlović’s real estate in Punat. Later, like several other Isajlović’s companies, it went bankrupt.

Isajlović built the state-owned Petrol’s service stations in Bosnia and Herzegovina and was the notorious representative of Golobič’s Ultra
Dragan Isajlović also found markets outside Slovenia, through his business and political connections. He thus connected with the eternal leader of the Republika Srpska in Bosnia and Herzegovina, Milorad Dodik. In the past, certain Slovenian media outlets have mentioned that Isajlović is the owner of the SGP Gorenjc company and the co-owner of Gorenje inženiring and NE-MU. He was also part of the team for the construction of the petrol stations in Republika Srpska, for the state-owned company Petrol. For this purpose, the Slovenian company established the Petrol BIH Oil Company in Bosnia and Herzegovina. All of this was built by the Elmont company from the Bosnian town of Žepče. Dragan Isajlović also appeared as the owner in this company, through various financial channels. It is not surprising that Isajlović was part of the team when it came to the construction of the state-owned Petrol, as the connections within the deep state enabled him to access any Slovenian state-owned company. All of this was happening in the mid-1990s.

However, the Elmont company did not only play a role in the construction business. They were also the representatives of three companies of the infamous Golobič’s Ultra. Its main name was Gregor Golobič, the director of the transitional left from the background. As Ultra’s contractor, Elmont represented Ultra in Bosnia and Herzegovina, Montenegro, and Albania. We will describe all these structures in the upcoming articles.

Metka Isajlović’s assets are frozen, and she has been convicted of suspicious transactions
As it turns out, some of the Slovenian prosecutors have also bravely stood up against the former UDBA member Isajlović. As reported by Siol, in 2019, an indictment was filed against him, for the transactions of the I.S.O. company. Isajlović’s wife, Metka Isajlović, was once the majority owner but is now the procurator of this company. She is also a former agent of the State Security Service. Due to the strong influence of her husband, she repeatedly lent her name in Isajlović’s various suspicious transactions. As we have previously learned, this also resulted in her being convicted in the past, and her assets have been frozen. Isajlović was also being investigated due to business fraud in Splošno Gradbeno Podjetje (SGP) Tehnik company. SGP Tehnik’s ended its long-time journey in 2014 when it went bankrupt.

In the stories of the Slovenian transition, where the important players of the former regime appear, nothing happens coincidentally. In SGP Tehnik’s last years of operating, Isajlović became the owner of a part of its property, which is how the construction company Gorenjc from Radovljica became the key property. We have already mentioned in the article that the Gorenjc company had participated in the construction of the Nordic Centre Planica, as one of the subcontractors.  With the purchase of the Radovljica construction company, Isajlović got himself a concrete plant and part of the subcontracting of Gros’ sports pride in the valley under Ponce.

Isajlović became the owner of the Gorenjc company through an unknown official buyer when SGP Tehnik sold the company in 2010. In 2016, Isajlović sold Gorenjc to Šešok’s company Iskra Implus. They bought the claims from Energoplan, which was ruled for many years by Zlatko Sraka, who was strongly connected to the economic network of Zoran Janković and the former regime. Despite the fact that SGP Tehnik eventually went bankrupt, the ambitious Isajlović still marketed real estate through the Bank Assets Management Company, up until 2018.

By: J.S., STA Slovenian mountains claimed five lives over the past two days in one of the deadliest weekends in years. Discounting those, a total of...
Read more
Sport

By: J.S.,STA The Slovenian women's volleyball team has a new coach, Italian expert Marco Bonitta, who has signed a two-year contract with the Slovenian Volleyball...
Read more
Sport

By: P.T., STA Slovenia lost 32:33 to Montenegro to end their European Championship campaign in the group stage, placing third in Group A. After winning...
Read more
Culture

By: J.S., STA Sara Kern's debut feature Moja Vesna (My Vesna) will have its world premiere at the 72nd Berlin International Film Festival, where it...
Read more

By: J.S., STA Slovenian mountains claimed five lives over the past two days in one of the deadliest weekends in years. Discounting those, a total of...
Read more
Culture

By: J.S., STA Sara Kern's debut feature Moja Vesna (My Vesna) will have its world premiere at the 72nd Berlin International Film Festival, where it...
Read more
Slovenia

By: P.T., STA The National Council of Carinthian Slovenians (NSKS), one of the main Slovenian minority organisations in Austria, proposes establishing a standing committee of...
Read more
Slovenia

By: P.T., STA While much less tax revenue was collected due to the epidemic in 2020, last year again saw an upward trend, as the...
Read more