Minors were forced to participate in sexually-themed games at the camp, writes the Republika Macedonian news portal. After the report appeared in the press, local fact-checkers, not convinced of the validity of the content labelled it “Fake News”. It appears the arbiters of factual information deliberately wanted to wipe out news about the sex camp.

A shocking case of child abuse was reported on by the Macedonian news outlet Republika, which wrote that a Macedonian youth organization had organized a camp for underage children where they were forced to participate in various sexually-themed activities. The case was brought to the attention of the portal by the parents of one of the children, according to whom the camp organizers instructed the children to undress naked and then stand side by side. After that, they had to cover their body parts with paint and make an imprint on a piece of paper, which the adult camp leaders looked at and commented on, with scores being tabulated.

According to a father requesting to remain anonymous to protect the identity of his daughter, children aged 16 and younger were asked to list how many types of condoms they knew and were also asked how many sexual partners they had had. The appropriate answer to the latter question was also given to be more than two sex partners for 16-year-olds.

Following the release of the interview with the father, two more parents decided to go public with their children’s accounts of what happened at the scouts camp. According to their reports, the children had no choice but to participate in sexual games because the camp was quite far from the capital, Skopje, making their early return home quite problematic. The mother of one of the children reported to Sloboden Pecat newspaper that one of the activities at the camp required the children to paint a picture of a landscape in which two people were engaging in sex. The parents also reported that seven children were so traumatised by what they experienced that they quit the scouts and several of them required psychological therapy to process the events.

According to Republika’s sources the First Skopje Scout Group, which organized the camp, receives significant financial support from the city of Skopje, as well as from the Foundation Open Society – Macedonia (FOSM), which is linked to the American speculator billionaire, George Soros.

The Macedonian newspaper has information that FOSM funds several organisations that promote far-leftist ideology in sexual education curricula for children, but the foundation denies being aware of the said scout organisation spending its money on such activities. A statement was also issued stating that the FOSM Board had supported a number of NGOs and informal groups as part of the Green Leap – Partnership for Climate Action concept. A group called the First Skopje Scout Group received a grant of $12,229; according to the Soros-linked foundation’s announcement, the money was intended to create a positive atmosphere in the scout camp for organizers to educate about the environment and nature. 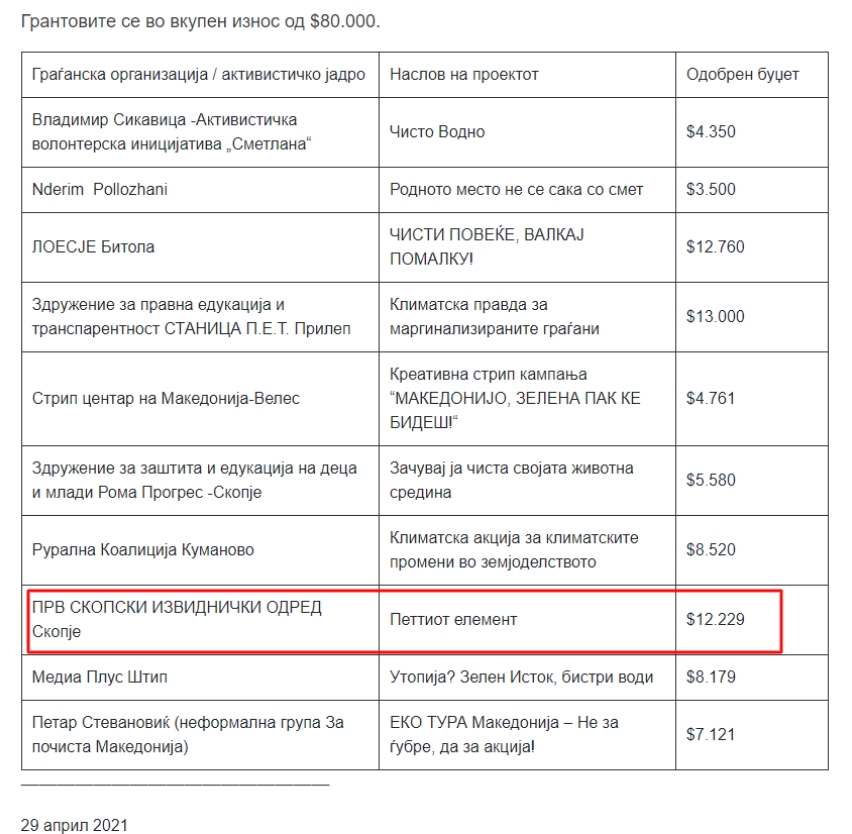 The article also points out that the health education and research NGO HERA, funded by George Soros’s organisation, promotes leftist ideology in sex education. Education Minister Mila Carovska, a former staff member of the NGO, claims she was not directly involved in drawing up the programme of the scout group. Two years ago, however, the scout group organised a similar camp called Sex, Scouts & Rock’n’Roll, which was supported by HERA and the city of Skopje. The promotional material for the event included condoms with the scout group’s logo and the Skopje city coat of arms. 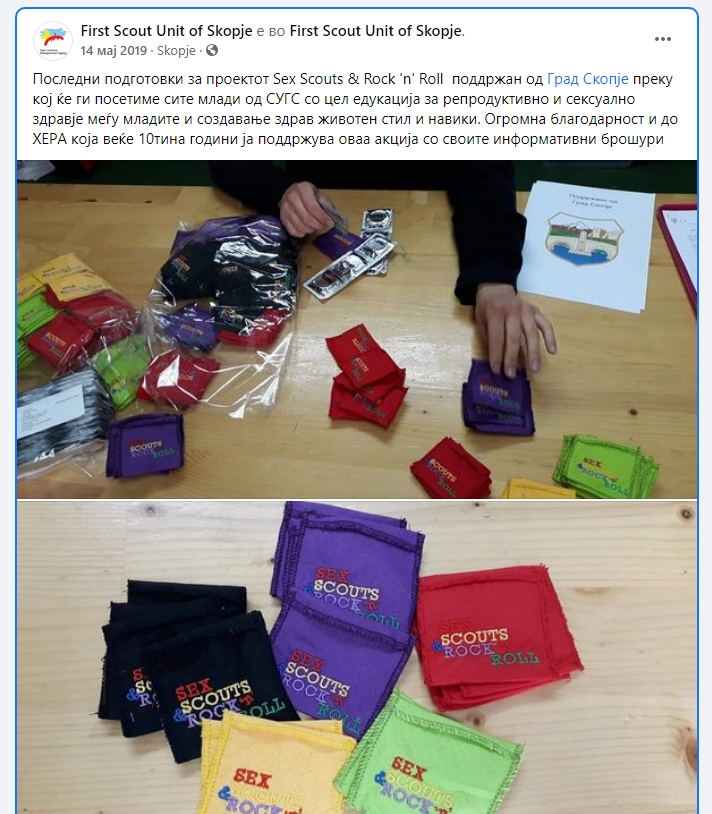 After the event, HERA tried to clear itself regarding the sexually themed camp. They issued a statement saying that properly conducted sex education should help to protect against sexually transmitted diseases, sexual harassment, violence and discrimination. They added that sex education must not include any activity that puts participants in an uncomfortable situation, and it is not acceptable for adolescents to feel they are being abused or forced to do something against their will. In its statement, HERA clearly denied having participated in the above mentioned activities.

Since the outbreak of the scandal, several children’s rights organisations and prosecutors have been investigating the incident, while camp organiser Zoran Siljakovski insists that the children were informed that sex education was part of the camp’s programme, adding that participants were free to call their parents and leave the camp at any time. The head of the scout association also told the press that they have been organising camps including sex education programmes since 2009 and have never received any complaints.

After the press reported on the scandalous scout camp, the “independent” fact-checking company Vistinomer, also funded by Soros’s foundation, described the articles about the child abuse as fake news and arranged for them to be censored on Facebook. After that, all the articles about the camp and its funding were labelled as containing fake news. Moreover Facebook presented Vistinomer’s comments as the opinion of an independent organisation, despite the fact that Vistinomer receives financial support from the same foundation that is criticized in the articles, Republika writes in another article. 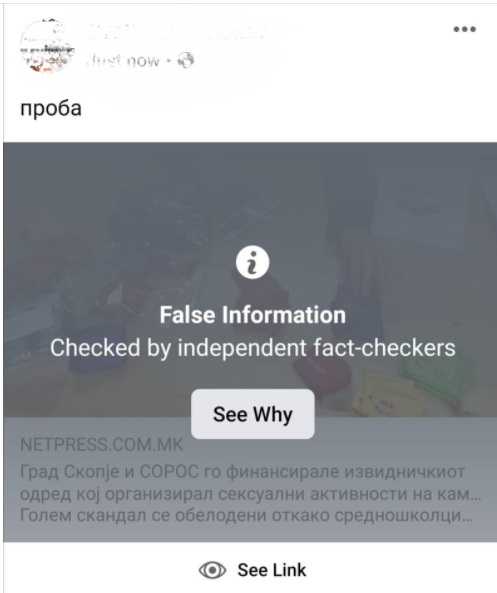 Serbian-born Macedonian journalist Dragan Pavlovic-Latas believes that classifying the articles as fake news and blocking content on Facebook was the government’s doing, in an attempt to eliminate news depicting it in a bad light. The reporter said Vistinomer wanted to protect Skopje Mayor Petre Silegov ahead of the elections, and that the news about Soros’s foundation would have also disrupted the cooperation between the NGOs and the system led by Prime Minister Zoran Zaev.

By: P.T., STA The Court of Audit issued the Slovenian Academy of Sciences and Arts (SAZU) an adverse opinion for its 2020 operations, establishing a...
Read more
Slovenia

By: J.S., STA The value of industrial production was down 0.2% in June compared to May, driven by declines in all relevant fields. It continued to...
Read more
Slovenia

By: J.S., STA A total of 1,714 people tested positive for coronavirus in Slovenia on Tuesday, down 3% week-on-week. Six Covid patients died, the Health...
Read more

By: Kavarna Hayek The goal of the Washington establishment, the American deep state and the progressive media is to prevent Donald Trump from running in...
Read more
Slovenia

By: J.S., STA The Austrian province of Carinthia is home to a sizeable Slovenian ethnic community, something that has been reflected in the names of...
Read more
Focus

By: V4 Agency The heatwave that has been raging in the country for weeks and the extreme lack of rainfall have resulted in a halting...
Read more
World