Between 2015 and 2018 the Dutch government led by Mark Rutte sponsored a number of jihadists and organisations that violate people’s fundamental human rights. When the financing problems surfaced, the prime minister began to mount obstacles to the investigation which, as a result, could only be launched in 2021, instead of 2018.

Dutch PM Mark Rutte tried to personally hinder investigations pertaining to the Dutch state providing financial support to the Syrian rebels. He put pressure on government officials to get them to reject the approval of the motion in parliament. According to the government’s view, the thorough inspection of the so-called “aid program” could create tensions between the allies. 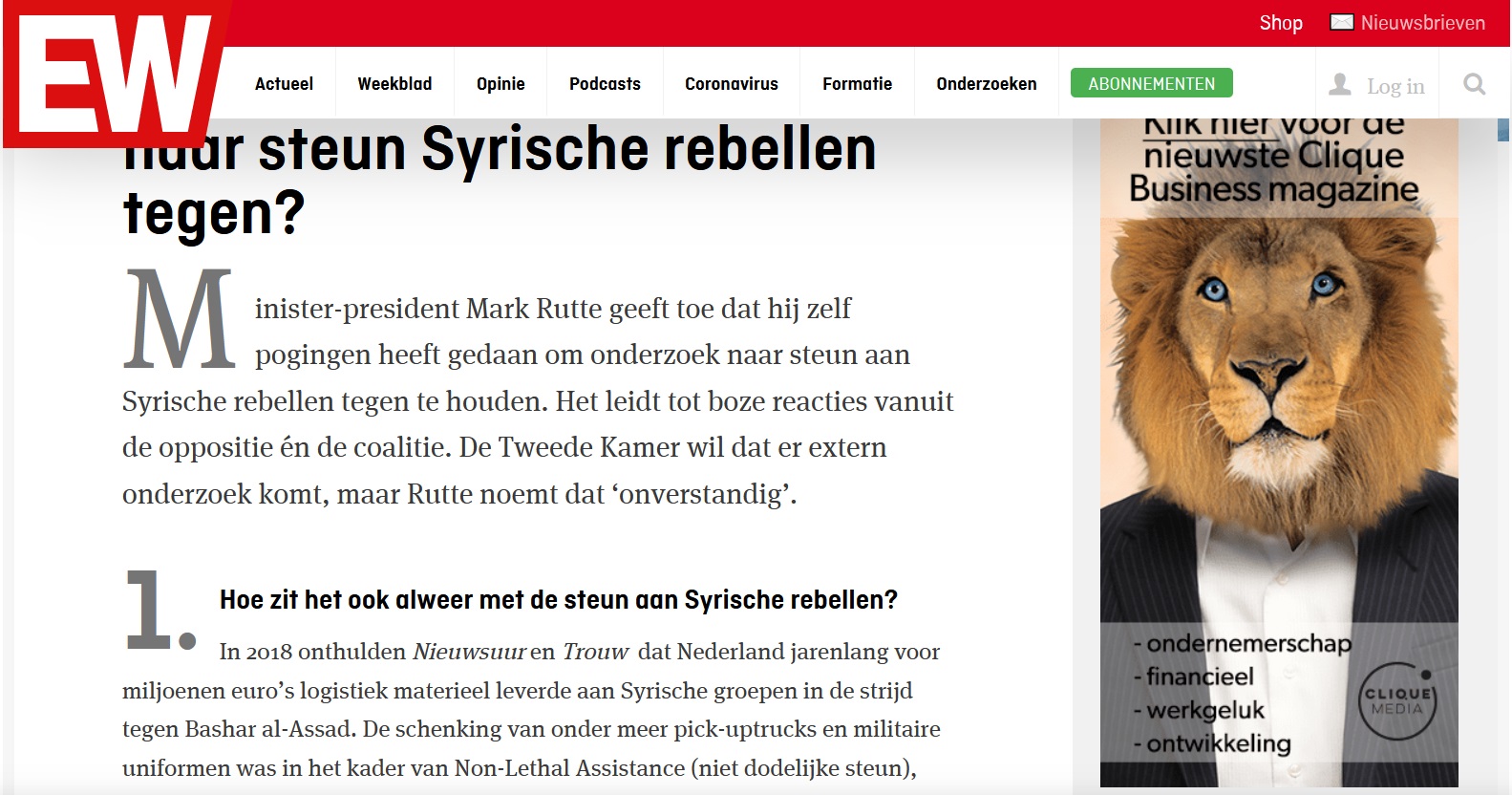 Based on information relayed to Nieuwsuur, PM Rutte even spoke before the Council of Ministers in a bid to handicap the investigation.

Between in the three years from 2015 to 2018, within the framework of the so-called Non-Lethal Assistance (NLA) program, Mr Rutte and his government provided uncontrolled financial support to radical militant groups in Syria from Dutch taxpayers’ money.

In 2018 Nieuwsuur (the News Hour television program) and the daily Trouw newspaper already published reports about how some of the 22 armed Syrian groups – supported by the Dutch government – had violated basic human rights and sought active cooperation with the terrorists. The aforementioned groups have received from the Netherlands 313 vehicles, food and medicine supplies, communication devices, tents, uniforms and other items, worth a total of 25 million euros.

Almost three years after the problem was exposed, parliament approved a motion on the NLA program to have independent fact-finders investigate the issues surrounding the program, as well as the legality of the state subsidies. Sources close to Nieuwsuur say Mr Rutte tried to persuade several ministers that he did not want such a fact-finding inquiry.

Earlier Foreign Minister Stef Blok stressed said that the investigation could lead to serious problems because “much of the information is classified and confidential, and the inquiry could also cause tensions between the allies participating in the subsidy program.”

The original goal of the NLA program was to provide non-direct military support for Syria’s rebels and moderate militant groups, supplying them with logistical equipment, food and medicine. But the program was discredited after it became clear that it was not so easy to determine which belligerent sides were actually moderate. As a result, groups that not only supported extremists but were themselves jihadis also received funding, and NLA was discontinued in March 2018.

Following this, Mark Rutte and his government were able to delay the setting up of an investigative fact-finding committee for three years. In the end, the motion submitted by CDA lawmaker Martijn van Helvert was approved by a large majority in the House of Representatives, and authorities launched an external inquiry into the matter.

(INTERVIEW) Dr Dejan Valentinčič: “There is interest in returning to Slovenia, many who remain abroad want to work professionally with Slovenia”

By: Lucija Kavčič Caring for Slovenians outside our borders is one of the most important and not the easiest tasks of the state of Slovenia....
Read more
Important

(INTERVIEW) Jan Zobec: “It is a bitter realisation that for more than thirty years since independence judges have freedom of expression only in a...

By: Petra Janša  “Everyone who has a more critical view of the functioning of the Slovenian legal state, especially the judiciary, who are not mediocre,...
Read more
Columnists

For the unity of democratic forces in the rebellion against the destruction of man and country!

By: Dr Janez Juhant Albert Svetina – Erno testifies that he is Ivan Maček – Matija ordered that everything that the prisoners of the post-war...
Read more
Columnists

The Slovenian country is bleeding

By: Dr Stane Granda We recently read that the proceedings against Dr Pavel Gantar were suspended, or the offense was dismissed because of a tweet...
Read more

Use of Slovenian is declining in Carinthia

By: P.T., STA Ever fewer people use Slovenian in Carinthia, home to the Slovenian community in Austria, a study conducted by pollster OGM for the...
Read more
Focus

By: V4 Agency The funeral service for the late British monarch Elizabeth II took place at Westminster Abbey in London on Monday. The ceremony was...
Read more
Focus

By: V4 Agency A survey found that three quarters of the population believe that France should move towards nuclear energy due to the recent energy...
Read more
Editors picks

By: Sara Kovač / Nova24tv A plaque bearing the names of the four world leaders who were the first to visit Ukraine after the start...
Read more
Share
© © Nova obzorja d.o.o., 2021
Manage Cookie Consent
We use cookies to optimize our website and our service.
Manage options Manage services Manage vendors Read more about these purposes
View preferences
{title} {title} {title}
Go to mobile version