Carla Toscano: “The 2030 Agenda aims to destroy the person and the family”. 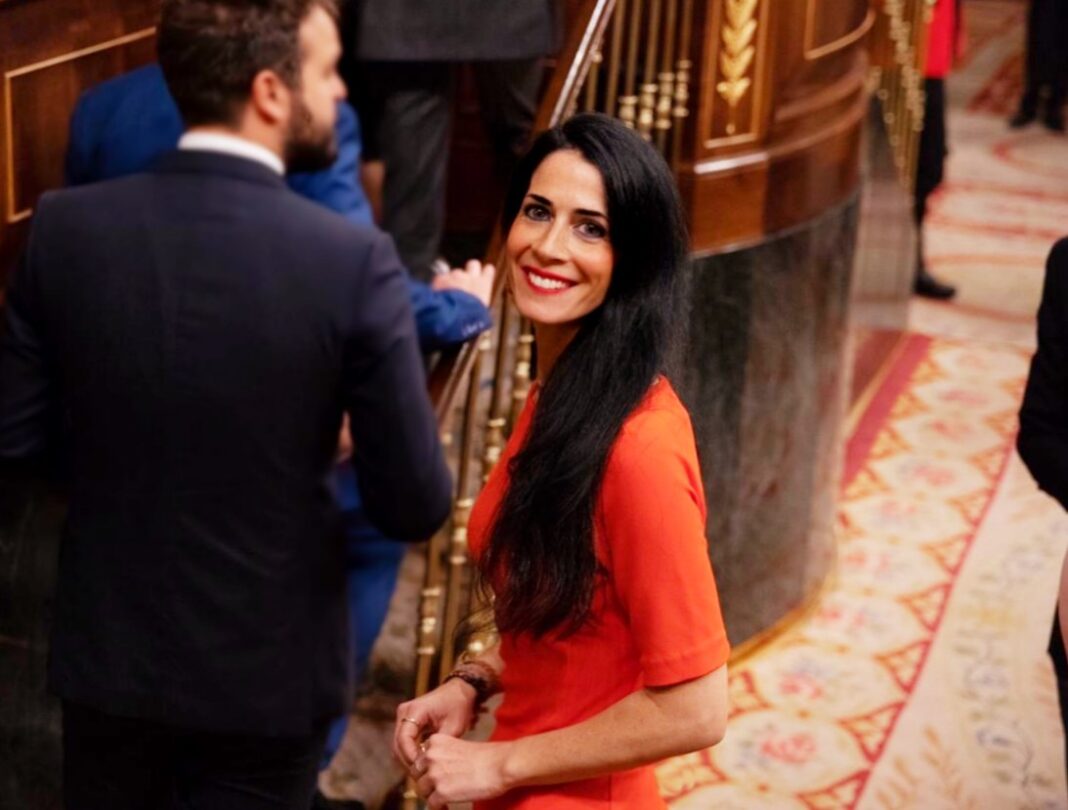 Interview with Carla Toscano, national MP for VOX and spokesperson of the party in the Commission on Gender Violence.

In addition to your political activity against gender ideology, you are well known for your presence on social networks, especially on Twitter where you claim to defend Good, Truth and Beauty. Is the key in these values now lost?

That is the key to everything. Gender ideology is the cultural battle of our time. There are supranational powers and organisations that seek the destruction of human nature, the destruction of the family. This can only be achieved with a lot of propaganda and unjust laws, such as gender and “equality” laws, LGBT laws, abortion and euthanasia laws. It is about evil triumphing. That is why I speak of Good, Truth and Beauty, because only when we make these values prevail can we effectively combat everything that this gender ideology stands for.

Values that were taken for granted because they constitute basic principles of our civilisation.

Yes, values as basic as the right to life. We must bear in mind what it has cost to achieve this right to life, because it is enough to review the history of humanity to understand how little life was worth in some civilisations. It has cost a lot to achieve it, in the same way as equal rights for men and women, or the freedom to say, think and do. These are basic rights. These are fundamental rights, unlike the absurd rights that the left invents every time it pursues a political objective.

But the truth is that they have managed to turn everything upside down. I recently participated in a conference of the ECR (Conservatives and Reformists) group where we talked about how they have managed to change the meaning of values in Europe. Now, defending fundamental values is fascist, you are demonised if you defend the good. That’s why we have to keep up our discourse, to oppose them and to keep fighting against laws, ideas and propaganda that do a lot of harm to human beings. Not only because they destroy many lives, such as the abortion law, but also because they break up families and promote inequality and privilege. We will not reach Good, Truth and Beauty if we do not defend life, freedom and real equality.

You mentioned the right to life and Europe. What has happened in Europe to make leftist ideology the official ideology of the EU or for President von der Leyen to claim that teaching LGBT ideology in schools is a European value?

It is the globalist agenda. These are the “values” proposed not only by the left, but also by supposedly conservative parties, such as the Partido Popular in Spain. We just don’t realise that this whole gender ideology is a global dictatorship. In politics and in the media we all know what is going on, but most people are not aware and have to start reacting. For example with the teaching of LGTBI ideology in schools, it’s not just a question of whether you agree or not, it’s that all citizens and all parents have to defend our freedom to educate our children as we want, because that freedom is sacred.

Unfortunately, Spain is the testing ground of globalism and one of the worst experiments, the gender violence law, is now being exported to the rest of Europe.

This is one more consequence of this global dictatorship. No country has a law like the law on gender violence because it is an unjust law, a law that violates fundamental rights. It is an ideological law that has not helped to reduce the number of women victims, but which causes immense damage to families and to many men. This law is going to be exported because it is an ideological law that contributes to the idea that man is evil by nature, that man is violent, and serves to set men and women against each other. I really don’t know to what extent they will be able to export it because it violates fundamental rights such as equality before the law. There will be countries that will accept it, like Spain, but many others will not.

The problem is that it is all framed within the 2030 Agenda, where feminism is a key player.

Yes, all these laws are nothing more than small battle fronts that they are winning in a larger objective. The bad thing is that citizens are not realising what Agenda 2030 implies, the loss of freedom it entails, and, in the end, we are pawns of institutions whose aim is the destruction of the person and the family, and they use these laws as tools. If we do not stop them and citizens do not react, with their vote or by protesting in many ways, we will eventually lose our freedom.

A pin, that of Agenda 2030, worn by all political leaders except VOX. In fact, there are already “2030 council departments” in municipalities governed by the Socialists or the Popular Party.

With the fall of Kabul, feminists in the Spanish government expressed concern only for “women and girls”. What if someone only cared about men?

I always give that example. Imagine a law “only for whites”, or the law “will increase the penalty if the aggressor is black”. With a man you can say that, but in other cases it is outrageous. That’s why, when I read what our feminists say about the Taliban, it is shameful but at the same time I feel sorry for them. The left has never defended the rights of Muslim women, but now this happens in Afghanistan and they are worried about them. First of all, we have to worry about everyone, men and women. As VOX always says, all lives are important. And secondly, I feel sorry for their huge contradictions, always defending Islam and now they have to criticise it.

Maybe because they see Islam as an ally against a common enemy?

Yes, the common enemy is the Western values of the Judeo-Christian civilisation. That is why the left supports Islam, even if they are not compatible in terms of values. There are Muslim countries where homosexuals are hanged, where women do not have the same rights as men, where those false groups that the left claims to defend are oppressed. It is totally incoherent.

Yes, my account has been closed twice. The funny thing is that I’ve been threatened with death on several occasions, and I’ve been called all sorts of insults, and neither of those accounts have been cancelled. However, I, who do not insult or threaten, have been censored. Twitter is another arm of the globalist agenda, and since the intention is that only certain ideas should be heard, those of us who disagree with the agenda and propose other ideas are the ones who suffer censorship.

This is another contradiction, social networks claim to promote freedom of expression, but they exercise censorship.

Everything the left claims to defend is their main enemy. They claim to defend equality and they propose laws that cause inequality and give privileges to one part of society over the other. They claim to defend freedom and they create laws like the democratic memory or LGTBI laws so that you cannot oppose what they think. They limit you in how to educate your children, they want to indoctrinate them in their ideas and then they are the champions of freedom of expression.

The worst thing about all these contradictions, and political correctness, is that there seems to be no end to them.

They are creating, and succeeding in creating, a society in which you can’t offend anyone. A generation of glass in which no one can dare to say something we don’t like. And I always defend the right to offend within limits, that is, without threats or violence. We have to defend that right because we are creating a society of fools. I don’t have to like everything that others say or do, it’s just that it’s healthy for us not to agree on everything. We are raising a generation of people who will not dare to face a refusal, a disagreement. We will be fragile people and the first victim of all this is freedom.

Given this scenario, are you optimistic about the future?

Yes, because there is hope, because there are people and there are parties, such as VOX, and also some media, who will continue to tell the truth. I reiterate my personal commitment against gender laws, and like me so many other people who want Good to prevail. And Good will prevail.

By: Domen Mezeg / Nova24tv.si “They came today and will stay until Friday. Of course, this is about LIBE, the European Parliament Committee on Civil...
Read more
Migration

The Afghans hid among the cargo

By: C.R. The driver of a truck with Slovenian registration plates drove to the Obrežje border crossing to enter Slovenia. Police officers carried out a...
Read more
Columnists

From Stevanović to Prodanović

By: Mojca Škrinjar The predicted Indian summer betrayed the weathermen, and autumn reminded us unusually early with wind, low temperatures, and unusual downpours. I will...
Read more

By: Domen Mezeg / Nova24tv.si “They came today and will stay until Friday. Of course, this is about LIBE, the European Parliament Committee on Civil...
Read more
Focus

[Video] Watch the Video on the State of the Media in Slovenia, Which Sophie in ‘t Veld Censored!

Journalist Možina Told Sophie in ‘t Veld’s Delegation the Truth: The Media Is Being Brutally Exploited by the Transitional Left for Its Political Fight!

By: Sara kovač / Nova24tv “Currently trying to clarify the media ‘dictatorship’ for the EU Parliament’s mission. I told them loud and clear what is...
Read more
Share
© © Nova obzorja d.o.o., 2021