In Slovenia, the left still worships totalitarian symbols of communism, such as the red star or the sickle and hammer. Even in the middle of the Slovenian capital, Ljubljana, there is a monument to the mass murderer Boris Kidrič, and many roads or streets are named after dictator Josip Broz Tito. That is why the editorial board of the conservative magazine Demokracija organised a national championship in chopping red stars and other totalitarian communist symbols.

Last week, the first Slovenian national championship in a new outdoor board game took place in Ljubljana: “I will cut the red star”. The first winner was Urban Purgar from Ljubljana. That sunny afternoon, an interesting group gathered to compete in several disciplines of destroying revolutionary communist symbols, under which 100 million people died in the 20th century.

“I got the idea a few months ago, when Dejan Škvarč from Slovene Littoral posted a photo of himself cutting a red star on the social network Twitter. I thought we could organise a competition,” said the editor-in-chief of Demokracija, Jože Biščak, the father of the five challenges that the competitors face in the game. These are: the sting of the red revolution, bowling of the revolutionaries, spraying the symbols of the revolution, renaming streets and roads, and the cutting of a red star.

“Marxism, socialism and communism, which are versions of a deadly red ideology that sent people to their deaths simply because they had a different worldview, is emerging today in the form of cultural Marxism. On a symbolic level, the competition tries to show what it thinks about this totalitarian ideology,” Biščak explained. He added that the competition was in a way an “artistic performance”, a kind of parody of Svetlana Makarovič’s event entitled “I will wear a red star”. Hence the name of the board game “I will cut a red star”.

The atmosphere between the five competitors (Klemen Traven, Urban Purgar, Ksenija Šeligo, Dejan Škvarč, and Mitja Grmovšek) was excellent. Even though the game was competitive in nature, they encouraged each other. The estimated time for the five challenges was about five minutes, but all five finished them in less than two minutes.

The first challenge, when a competitor had to hit a red circle with at least one arrow in which a sickle, hammer and star were drawn, did not cause anyone excessive problems. True, some needed more throws, but they quickly jumped the hurdle nonetheless. The fastest (two seconds) was Purgar, who hit the target with the first throw and already gained the advantage.

Unexpectedly, the competitors fell behind the most in a seemingly simple game – the bowling of the revolutionaries. With three balls, they had to knock down nine pins on which the bloodiest communists of the 20th century were drawn: Josip Broz Tito, Boris Kidrič, Stalin, Lenin, Karl Marx, Friedrich Engels, Che Guevara, Mao Zedong, Kim Il-sung.

The challenge caused the most “problems” to Dejan Škvarč and Mitja Grmovšek, who lost valuable time (more than 30 seconds). This was later evident in the final result, as they took 4th and 5th place, respectively. Namely they could no longer make up for the delay in the next three games.

The third challenge was to spray leftist symbols with a water pistol: a red fist, a Capital book, a red star, and a sickle and hammer. The most skilful was Ksenija Šeligo from Maribor, who washed away the totalitarian symbols of hatred and intolerance in just four seconds. With the exception of the incredibly skilful Purgar, the other contestants also needed 20 seconds to jump this hurdle. This is one of the reasons why the sympathetic Šeligo gained an advantage with exceptional results in this game, which she did not lose until the end of the game. She took 2nd place.

The fourth challenge was to change the road name tables. The competitor had to replace the board with ‘Tito street’ with the board ‘Independence of Slovenia street’. Among the most skilful was Ljubljana’s Klemen Traven, who made up for the rather missed time from the first game, when he could not hit the red circle with an arrow. In the end, Klemen was third.

In the fifth challenge, a competitor had to cut a wooden red star into at least five parts. Mitja Grmovšek from Duplek proved to be very good with quick consecutive shots, but he could not make up for the time he lost in previous challenges.

“The idea for this game is good. We would join again,” said Škvarč, and the others agreed. Biščak said that this was the first and unofficial competition, but the results will count for history. “To make it a little more solemn, everyone who competed won the symbolic title of Knight of Freedom. Next time, when the competition is bigger, only the first three will receive the title, and today’s five because they started writing the history of the competition,” the editor of Demokracija emphasised.

The wish is to organise regional pre-competitions first next year, and the winners will qualify for the finals. There may also be a championship with international participation. It would be a big social event and a celebration of freedom.

“Freedom is what Marxists, socialists and communists have oppressed (and still oppress) and literally committed genocide against class enemies. And freedom is something that even modern leftists despise, as they do not allow people free decision-making and freedom of speech. That is why they coined the term “hate speech” and much more. And because we are lovers and defenders of freedom, with this social game we show our attitude towards the still living ideas of red totalitarianism and its symbols,” added Jože Biščak.

The board game “I will cut a red star” has five challenges. The competitor must beat them in the shortest possible time.

The first challenge: The sting of the Red Revolution

The competitor must hit the revolutionary symbol with arrows at least once from 2 meters – a red painted circle with a sickle, hammer and star. The diameter of the circle is 15 centimetres. 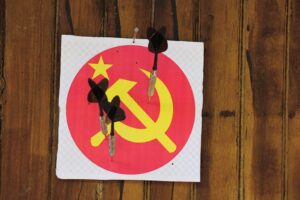 The second challenge: Bowling of the revolutionaries

The competitor must knock down nine pins from a distance of five meters with three balls in the shortest possible time. On the pins are pictures of the bloodiest red revolutionaries. These are: Josip Broz Tito, Boris Kidrič, Stalin, Lenin, Karl Marx, Friedrich Engels, Che Guevara, Mao Zedong, Kim Il-sung. 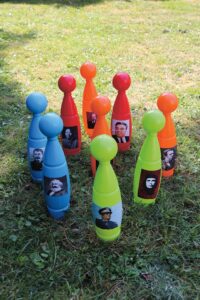 The third challenge: Spraying the symbols of the revolution

The competitor must hit four symbols of the left (4 by 4 centimetres) with a water pistol from a distance of two meters, by knocking them down with a jet of water. The symbols are: the red fist, the book Capital, the red star, and the sickle and hammer. 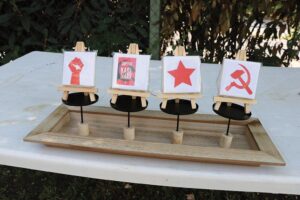 The competitor must cut a wooden red star into at least five pieces. The length of the star from the upper to the lower section is 25 centimetres. 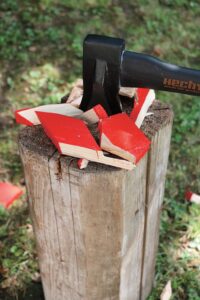