Expert on corruption, Bojan Dobovšek, on Vesel’s major earnings: In whose interest is he acting, if he earns five times as much at FIFA, as he does at the Court of Audit?

In its show Planet 18, Planet TV has consistently and correctly presented all the problems related to the “part-time” work of Tomaž Vesel at FIFA, and with this, they have basically set up a mirror to the “national party” television station and showed what news at 6 p.m. should actually look like. In the case of the former mayor of Log-Dragomer, Miran Stanovnik, who was once known as the “desert fox,” they first showed what the processes in such matters should actually look like, and then also had a former member of the Commission for the Prevention of Corruption and President of the Dobra država party (the Good State Party), Bojan Dobovšek on their show, who said that the high earnings alone show that something is not right.

Are the additional earnings of the President of the Court of Audit, Tomaž Vesel, in the amount of 200 thousand euros, which he receives from FIFA every year, actually illegal? When it comes to the case of the mayor of the Log – Dragomer municipality, Miran Stanovnik, almost everything is documented, published and archived at several addresses, from his request for additional work to the positive response of the Commission for the Prevention of Corruption (Komisija za preprečevanje korupcije – referred to as KPK). Vesel, on the other hand, explained that all of this is kept in his private archive and that he obtained the consent in direct communication with the former head of the KPK, Boris Štefanec. The Planet 18 show on Planet TV, with the help of the former member of the KPK, provided answers to all of these dilemmas.

The work of the President of the Court of Audit Tomaž Vesel and all other state officials is directly regulated by the Integrity and Prevention of Corruption Act, and the matter of additional earnings of all officials is explained in the Article 26 of the aforementioned law, Planet 18 reported on Planet TV. The very first point of Article 26 explicitly states that an official may not perform any other activity, intended to obtain income or material gain, in addition to his or her position in a public office.

The second point lists the exceptions to the aforementioned rule: a state official may perform pedagogical, scientific, research, artistic, cultural, sports and journalistic activities, or run a farm or manage his own property. Then there is the very important obligation. The official must notify KPK of his or her intention of engaging in additional activities in writing, no later than eight workdays after the start of the additional work – in Vesel’s case, this is the supervision of FIFA’s operations, and attach the employer’s permission and the contract for additional activities to his application.

KPK issued a permit for Stanovnik and made it public – however, they do not have any documentation for Vesel
In 2014, Miran Stanovnik became the mayor of the municipality of Log – Dragomer. He took office as a professional mayor. In April 2016, he informed the KPK that he would be starting an additional activity. The KPK warned him of the incompatibility of the two functions and urged him to apply for a permit under the Integrity and Prevention of Corruption Act. In June, he did just that and explained that he is engaged in motorsport at the highest level, while also participating in the promotion of road safety. 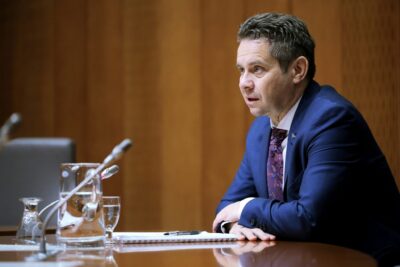 After carefully examining whether the additional activity could affect his exposure to corruption risks, he was issued a permit by the KPK, after only eight days. Unlike Vesel’s permit, Stanovnik’s permit can also be found publicly on the KPK website without any problems, as it was published there. And although Vesel keeps saying that all the necessary consent forms for his additional work and side earnings at FIFA are allegedly his private documentation, this is also not true, according to Planet TV.

As is evident from the case of Miran Stanovnik, the KPK published the consent for his additional earnings on its website, while the mayor of the municipality of Log – Dragomer received a copy at his home address, and one copy was officially sent to the municipality’s headquarters – as the municipality was Stanovnik’s employer. If the KPK’s consent really ever existed, in black and white, then one copy should undoubtedly be kept by the archives of the Court of Audit, and not just in Vesel’s personal archive. It is also extremely unusual that the KPK, which should have the third copy should, announced a few days ago that the Commission did not find the mentioned opinion in its documentary material and that according to all available information, the opinion was issued in direct communication between the heads of the two bodies. In this case, Vesel and the former first man of the KPK, Boris Štefanec.

Dobovšek: Vesel’s earnings show that something is wrong
Former KPK member Bojan Dobovšek also commented on Vesel’s additional earnings in the studio of the Planet 18 show yesterday. “In principle, the officials are not allowed to engage in an activity that provides income or any other material gain. Why? So that they can really focus on the work of the institution to which they have been appointed, and to maintain the integrity and independence of the institution. If someone earns five times as much somewhere else than they do in their parent institution, the question arises, in whose interest are they acting,” said Dobovšek.

Dobovšek said that the fact that the President of the Court of Audit obtains as much as three-quarters of his annual income outside the body he heads, is problematic: “We are currently dealing with the problem of procurement of medical equipment. In healthcare, these problems are constant, and a report from the Court of Audit will be made public in the future. Given that there are now doubts and ambiguities regarding the performance of the dual function, we are questioning the credibility of the institution and the head of the institution, which then sheds a bad light on the report, which we still need. We need to clarify what was actually going on with the procurement of the masks and the purchase of medical equipment; this is necessary for the progress of Slovenia. “

When asked whether KPK’s consent can be the subject of direct communication, or whether an archived trace must necessarily exist, Dobovšek answered that there must be a paper trace for the consent. “We are now questioning the credibility of the report, the institution, and the head of the institution, and those who will have to defend themselves in the future, will be able to use the same defence tactics. That is why it is important that the officials do not perform any additional functions that cast doubt when it comes to corruption. These earnings indicate that something is wrong,” Dobovšek said.

To conclude, Dobovšek also said that all those who hold such positions must be able to assess for themselves what this means for the matter of trust in institutions and the work of all institutions in Slovenia. He said that we can all see that the reputation of the institutions in the judiciary, police and the prosecutor’s office has been deteriorating recently, and now the same thing has started happening to the Court of Audit, the Financial Administration and other institutions that are even more important in prosecuting financial crime – which is one of the biggest problems in Slovenia, Dobovšek added.

By: P.T., STA The government decided to extend the administered pricing of heating oil through the regulation on the pricing of petroleum products that was...
Read more

By: P.T., STA The government decided to extend the administered pricing of heating oil through the regulation on the pricing of petroleum products that was...
Read more
Share
© © Nova obzorja d.o.o., 2021
Go to mobile version