Electricity robbery in broad daylight: Is this really happening?!

In this blog, tax expert and former general manager of Furs, Ivan Simič, deals with whether electric robbery actually takes place in broad daylight. He listed the regulations that have been published so far regarding the price of electricity and its purchase and sale. In Article 1 of the Regulation on the determination of electricity prices, it is stipulated that this determines the maximum permitted retail price of electricity for “small business customers, as defined by the Electricity Supply Act”. Then, Article 4 of the Electricity Supply Act (ZOEE) states that a small business customer is a “low-voltage customer who is not a household customer and has a connection power equal to or less than 43 kW”. The same article also states which companies are considered small and which are micro. It also follows from the Regulation that in order to be eligible for the measures, a small business customer must meet the following conditions: the total connection power of all its metering points is equal to or less than 86 kW and that consent for connection has been issued for the metering points up to and including July 21st, 2022.

At this point, according to Simič, it goes wrong – although the matter could easily be resolved if there was, of course, interest in it. “Furthermore, companies are being forced to sign contracts according to which they would pay more than 400 euros for one MWh for electricity, although until recently they were paying between 60 and 70 euros,” Simič warned of the behaviour of high-profile electricity distributors and the fact that small business customers are forced to sign unconstitutional contracts, according to which they will pay seven times more expensive electricity. In some (not so few) office buildings, electricity distributors have one metering point recorded and are therefore classified as large business customers, even though there are a large number of small business customers in these buildings.

Simič expects the government to react immediately and solve this illogicality

Based on all of the above, Simič believes that the Regulation on determining the electricity price setting mechanism for business customers applies only to those business customers who are not entitled to the measures from the Regulation on setting electricity prices. This means that all those business entities in office buildings with one metering point (one electric meter for the entire office building) and are small business entities, meet the conditions of the Regulation on the determination of electricity prices. “In the case of condominiums, it is necessary to take into account the conditions that each individual condominium owner fulfils, and not all condominium owners together, as they are not related legal entities, but rather individual and separate business entities or customers,” Simič asserted in his blog, which you can read in full here. 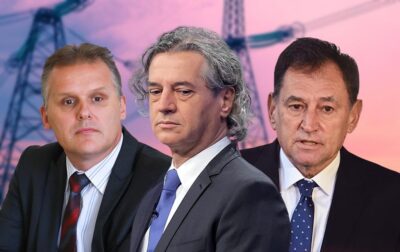 Golob is most interested in how he will carry out the privatisation of the entire Slovenian electricity industry from his position as a statesman.

On this occasion, it is worth recalling the article that our media published this spring – already in the title we wrote that Robert Golob is above all for the “free” privatisation of the entire electricity economy. The law on electricity supply – which was written at the time when the current Minister of Infrastructure, Bojan Kumer, was State Secretary under then Minister Alenka Bratušek – will be crucial in this regard. “ZOEE is the basis for smooth extraction of a large pie from network fees and the privatisation of the electricity network through distributors in the event of a favourable political situation,” said an expert in this field. ZOEE is apparently written very cunningly, logical at first glance, incomprehensible for politics anyway, but this leaves the door open for Golob’s scheme of controlling the entire electricity economy. It is therefore about the legalisation and quiet privatisation of individual segments of the electrical economy system, which are or will be very important in the future – this mainly includes car charging stations. At the same time, it is a regulated distribution of a huge lump of money from the monthly network fee of electricity users, which flows to the company SODO Ltd. If we look at the whole picture, the by-catch of money from Gen-I is cash compared to the billions of euros that are lost through electricity distributors and their suppliers, who are endlessly lining their pockets with monthly network fees on monthly electricity supply bills. “In comparison to the Slovenian electro mafia, the medical mafia is an amateur archery club,” remarked the “whistle-blower” on the Prava.si portal.

By: Tanja Brkić / Nova24tv The Balkans have been shaken by a financial affair involving our Prime Minister Robert Golob and the Kosovo Ambassador to...
Read more
Focus

By: Sara Kovač / Nova24tv “The investigation is still ongoing, there are two foreign citizens being investigated, who are accused of espionage, and this is...
Read more
Focus

Slovenian Democratic Party: By Abusing Emergency Procedures, The Coalition Is Making It Impossible For The Opposition To Do Quality Work

By: Gal Kovač / Nova24tv “This week shows once again that Slovenia is in a state of emergency when it comes to its coalition. Extraordinary...
Read more
Share
© © Nova obzorja d.o.o., 2021
Manage Cookie Consent
We use cookies to optimize our website and our service.
Manage options Manage services Manage vendors Read more about these purposes
View preferences
{title} {title} {title}
Go to mobile version