[30 YEARS OF INDEPENDENT SLOVENIA] From the war for Slovenia to the departure of the YPA: FINALLY SOVEREIGN ON OUR OWN TERRITORY 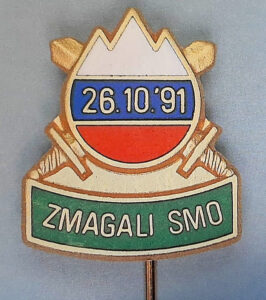 The decision to withdraw the defeated  YPA from Slovenia

Military strategy in exchange for an extension of time

In exchange for extending the deadline and for permission to withdraw through the port of Koper, the Slovenian Ministry of Defence, led by Janez Janša, seized a large part of the military equipment that the YPA had not yet taken away. According to Janša, the counterintelligence of the Slovenian Army accessed the system of encrypted YPA communications and listened to conversations between Zagreb and Belgrade, between Rašeta, Brovet and Šljivić and others. That is why the Slovenian negotiators knew exactly what to do in order for the YPA to acquiesce. During the last days of the negotiations, Slovenia received more than 200 tanks and other armoured vehicles, as well as much-needed means of transport. It also preserved the equipment of the military hospital in Ljubljana and around 700 wagons of various other military equipment. As Janša wrote, the then member of the Presidency of the SFRY, Janez Drnovšek, accused him of risking a conflict because of a few tanks. But it was not just about “a few tanks”, as the equipment and armaments that Slovenia had secured in the last phase were worth almost 500 million US dollars. “Slovenia did not risk any conflict with this, as the representatives of the YPA signed a document by which the Yugoslav army formally renounced all remaining weapons and equipment in Slovenia.” Also, for several years after independence, these were the only weapons our country had.

Thus, on 26 October 1991, Major General Janez Slapar was able to report to President Milan Kučan on the departure of the last YPA soldier from Slovenia at a ceremony in front of the TO and militia units in the port of Koper. According to Janša, Slovenia actually controlled all its territory. “The key condition for international recognition has been met.

Transformation of the Slovenian Army

With the departure of the last occupying soldier from the territory of Slovenia, the transformation of the Territorial Defence (TO) of the Republic of Slovenia from a state of war to a state of peace and from a reserve to a conscript army with a professional core began. On 3 February 1992, the Presidency of the Republic of Slovenia adopted a general plan for the organization, equipping and armament and training of the TO, on the basis of which the Republic Headquarters for Territorial Defence (RŠTO) prepared a project for the organization of the TO. The proposed structure of the TO was based on the experience of its organization and the experience gained in the war, taking into account the characteristics of the armed forces of modern armies, and in terms of preparations for an armed conflict, it was based on the assessment that in a possible attack on the state of Slovenia, the attack would be conducted according to the principles of air-land battle. The ratio between manoeuvring and spatial work was defined to be 1:2. The TO was estimated to number around 45,000 men.

Development of the Slovenian Army  after the war

After the war, the armed forces, first called the Territorial Defence and then the Slovenian Army, were transformed into a peacetime armed structure with a professional core with recruits and reserve staff who ensured its basic mission, which is the defence of the homeland. Its transformation into a professional army coincided with the decision of the citizens of Slovenia that the common security of the country and its citizens would be best ensured by joining the North Atlantic Alliance and the European Union. Further qualitative development of the Slovenian Armed Forces is also connected with operations alongside our alliances. Due to the changed security situation in the immediate vicinity of NATO, at the 2014 Welsh NATO Summit, all member states committed themselves to halt the declining trend in defence spending, to aim for a real increase in defence spending alongside GDP growth, and move to a two percent GDP for defence in the next ten years, allocating 20 percent of these funds to the development of defence forces. The absence of the necessary development resources for modernization is reflected in the state of the Slovenian Armed Forces, which since 2013 has been assessed as having insufficient resources for operating in a crisis or war. The Strategic Defence Review 2016 highlighted the stagnation in the development of the defence system of the Republic of Slovenia, which does not reach the required level of ability to deal with future threats and risks to national security, fails to achieve all the assigned goals and tasks, nor establish all the necessary defence capabilities of the country. On the other hand, the state, as part of the alliances, needs the Slovenian Army to be able to defend the state, cooperate in ensuring the security of the state and its citizens, as well as to ensure or establish peace in the world. Investments in the development of the Slovenian Armed Forces are, therefore, necessary for the establishment of key military capabilities, defined in the long-term development programs of the Slovenian Armed Forces and the accepted obligations of the Republic of Slovenia within the Alliance.

The Resolution on the National Security Strategy of the Republic of Slovenia, as the basic development guiding document in the field of national security, assesses the threat to the state in such a way that “after decades of easing, tensions in the international security environment are increasing again.” The modern international security environment has become increasingly interconnected, complex and uncertain due to the negative consequences of globalization processes and responses to them. Key factors include multipolarity, a wide range of threats and actors with enhanced non-state agendas, the instability of the immediate neighbourhood, the global erosion of democratic values and human rights, international law and multilateralism, the assertion of unilateral interests and the limited international response capacity. This also makes it difficult to reach compromises, with global risks increasing. In such an interdependent modern international security environment, no state can ensure its (national) security completely independently. Thus, the national security of the Republic of Slovenia is also affected by certain modern threats, even if they do not occur directly on the territory of the Republic of Slovenia or in its immediate neighbourhood. The increased military threat is manifested mainly by the strengthening of tensions in crisis hotspots leading to armed conflict, by the acceleration of the arms race between important regional rivals and consequently, in correlation with the demonstration of power, the global redistribution of power due to the rush to control resources and supply options.  Other threats arise when foreign interests act to protect members of national groups in other countries with the aid of armed forces, and geostrategically redistribute the influence of important actors in the international community. Add this to the threats posed by derogations from conventional force agreements and the reduction of nuclear weapons. In the field of defence, the changed security environment requires greater preparation and responsiveness of the entire national security system, primarily through faster decision-making and crisis response, as well as the adaptability of military capabilities, which must be able to respond to both conventional and unconventional threats. For this purpose, the purchase of new assets and equipment is an investment in the development of the Slovenian Armed Forces, leading to an increase their readiness and ability to perform their tasks, and also in their peacetime cooperation with other state bodies. Here, it should be mentioned that the purchase of new equipment and weapons systems also includes investments in the communication and information system and cyber defence and infrastructure.

A decoration is a recognition given to an individual, a military unit, an institution or an organization for special merits, feats, courageous deeds and results achieved in peace and war. For the individual who is awarded this decoration, however, it has a moral dimension, above all. To motivate conscripts and TO units for education and training, they used incentive measures such as recognition of conscripts and elders, decorations, commendations, occasional awards, proclamation of the best individual, unit, staff and command, and awarding a transitional flag, plaque and trophy to the best staff – unit. As recognitions and decorations for participants in the war for the defence of Slovenian sovereignty, special recognitions were established at the state level and at the level of the Ministry of Defence, such as the battle insignia for an individual battle, the honorary war insignia, the order of the Slovenian Army on a ribbon with swords, the order and medal of the General Maister with swords, the medal of the Slovenian Army with swords, the medal for bravery and the medal for the wounded. The badge of honour is the highest recognition for exceptional bravery in war, or for sacrificing life. These were awarded on 26 October 1991 in Koper at the celebration of the departure of the last occupying soldier from the territory of Slovenia. They were handed over by the Minister of Defence, Janez Janša and the Chief of RŠTO General, Janez Slapar, and were awarded to: Branko Bratkovič for courage in the fight against enemy tanks on 27 June 1991 in Ormož; Ivan Britovšek for bravery in the fight against enemy soldiers for the Holmec border crossing on 28 June 1991; Miroslav Debelak for courage in capturing the enemy outpost on Rožnik on 28 June 1991; Bogdan Jenko, who risked his life to save a wounded comrade in battle near Koseze on 27 June 1991; Srečko Lisjak for courage in command in combat operations on 28 and 29 June and 1 July 1991 in Rožna dolina, Vrtojba and Nova vas; Roman Marguč for bravery in the battle with the armoured column at Brnik on 27 June 1991 and for the attack on the enemy outpost Suha on 28 June 1991; Jože Šoštarič for courage and exceptional success in the fight against the enemy column in the village of Prilipe on 2 July 1991; Marjan Trope for his courage in the attack on the barracks in Ribnica on 28 June 1991, rescuing a wounded comrade-in-arms, even though he was wounded himself; Milan Kangler for bravery in fighting the enemy.

By: P.T., STA A number of cultural, sports and culinary events presenting Slovenia will be held in Brussels this week as the country's EU presidency...
Read more
Slovenia

By: J.S., STA 1,034 people tested positive for coronavirus in Slovenia on Sunday, roughly a quarter fewer than the same day a week ago. Hospital figures...
Read more

By: P.T., STA A number of cultural, sports and culinary events presenting Slovenia will be held in Brussels this week as the country's EU presidency...
Read more
Slovenia