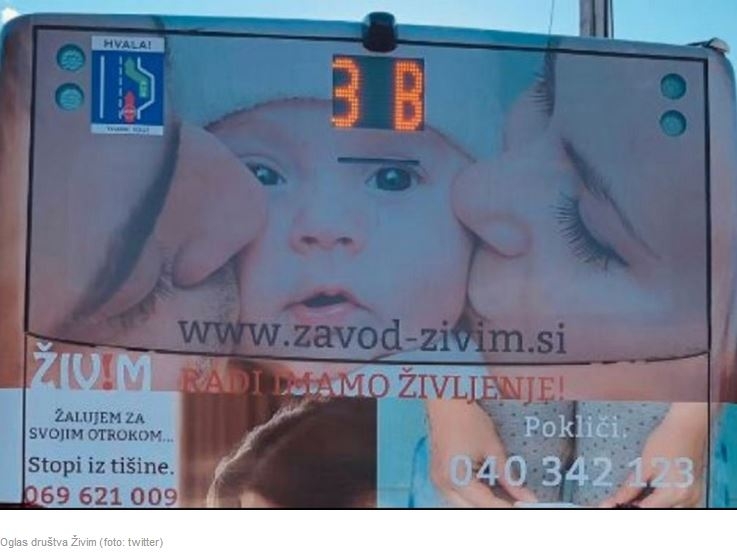 In the beginning of December, the Institute Živim ordered (and paid) the City Transport of Ljubljana (LPP) to put up posters on the city buses to promote the lives of children.

Due to pressure of the left-wing activists, the city company had already removed the paid advertisement (according to lawyer Dr Matej Avbelj unconstitutionally) from the city buses, after only a few days. The LPP explained that the advertisement was withdrawn “because of controversies that came up” and because “they should not engage in advertising, on the rented areas, that could stir any kind of intolerance”. The Živim institute published the following message at the beginning of the campaign: “In December and January we will spread the LOVE OF LIFE throughout Ljubljana! We are so THRILLED”! Thus, the institute is amazed by the move that the city company made and wonders how the support for childbearing can be regarded as “intolerance” for the city company. After all, these children would be new users of the bus company services. Of course, the message of the LPP is far-fetched, the purpose of ads is precisely to trigger public controversy. If the LPP really was afraid to trigger controversy, then it would not allow the advertisement of a vegan society that proclaim the “joy of life” for animals. Evidently, for the LPP leadership, advertising animal rights has precedence over advertising people’s rights.

Diplomat Valentin Inzko has revealed who the author of the non-paper which talks about borders in the Balkans really is!

Unbelievable: While Slovenia is winning on the 2020 Olympics, Delo’s war correspondent Uroš Esih reports on a victory over the fascists from 1945