We are revealing the business network of the Idrija tycoon Stojan Petrič, who has received almost a billion euros (994,095,033.96) of Slovenian taxpayers’ money since 2003, with the companies he owns.

Stojan Petrič is not trying to hide the fact that he wants to overthrow the current, successful government. His recent failures – the fact that he was not selected for the construction of the Brdo Hotel and the second pipe of the Karavanke tunnel, as well as the poor prospects of being chosen for the construction of the second track of the Divača-Koper railway line, are causing Petrič to panic. His plans were further ruined by the fact that Dušan Zorko, his business acquaintance left the position of director of 2TDK. It was Zorko who sold Petrič the newspaper Delo for a little over seven million euros, some time ago.

In recent years, Stojan Petrič, a protégé of Milan Kučan and a member of Forum 21, has taken on one of the central roles in the left-wing economic network. After the collapse of the large construction trinity – SCT, Primorje and Vegrad, he and his company Kolektor filled the vacancy and became the largest Slovenian builder of the last decade. KOLEKTOR CPG, d.o.o., earned a record 535,208,423.33 euros, from the state budget alone. The second part of the profit was brought to Petič by his company Kolektor Koling, with 232,081,909.97 euros of earning. Thus, he earned almost 800 million euros from these two entities alone.

Construction deals brought Kolektor almost 900 million euros
In total, Stojan Petrič has already earned 885,088,318.72 euros from the Kolektor Group. However, despite the fact that in recent years, he has invested a lot in his network, which would allow him to build another pipe of the Karavanke tunnel, or the second track of the Koper-Divača railway, his “helpers” who work in individual ministries, cannot help him this time.

Despite the fact that the Petrič family considers themselves the kings of Slovenian construction, they are apparently not aware of the fact that we live in a free-market economy, where quality and the lowest price are key factors in the decision-making process. Kolektor also does not seem to understand that the construction of tunnels and demanding interventions for the construction of the second track are simply too demanding a job for Petrič’s boys. Without any noteworthy references and with constant pressure on the National Review Commission and employees at the Ministry of Infrastructure, similarly to the Slovenian Motorway Company (DARS), the Petrič boys believe that, just like the failed construction tycoon Ivan Zidar, they can achieve anything they want.

Therefore, it makes perfect sense that Petrič offered financial and media support to the project of the transitional left and the possible prime minister Jože P. Damijan, since he could quickly issue invoices to the new government, should it actually take power, in the form of agreed-upon deals in the infrastructure projects. 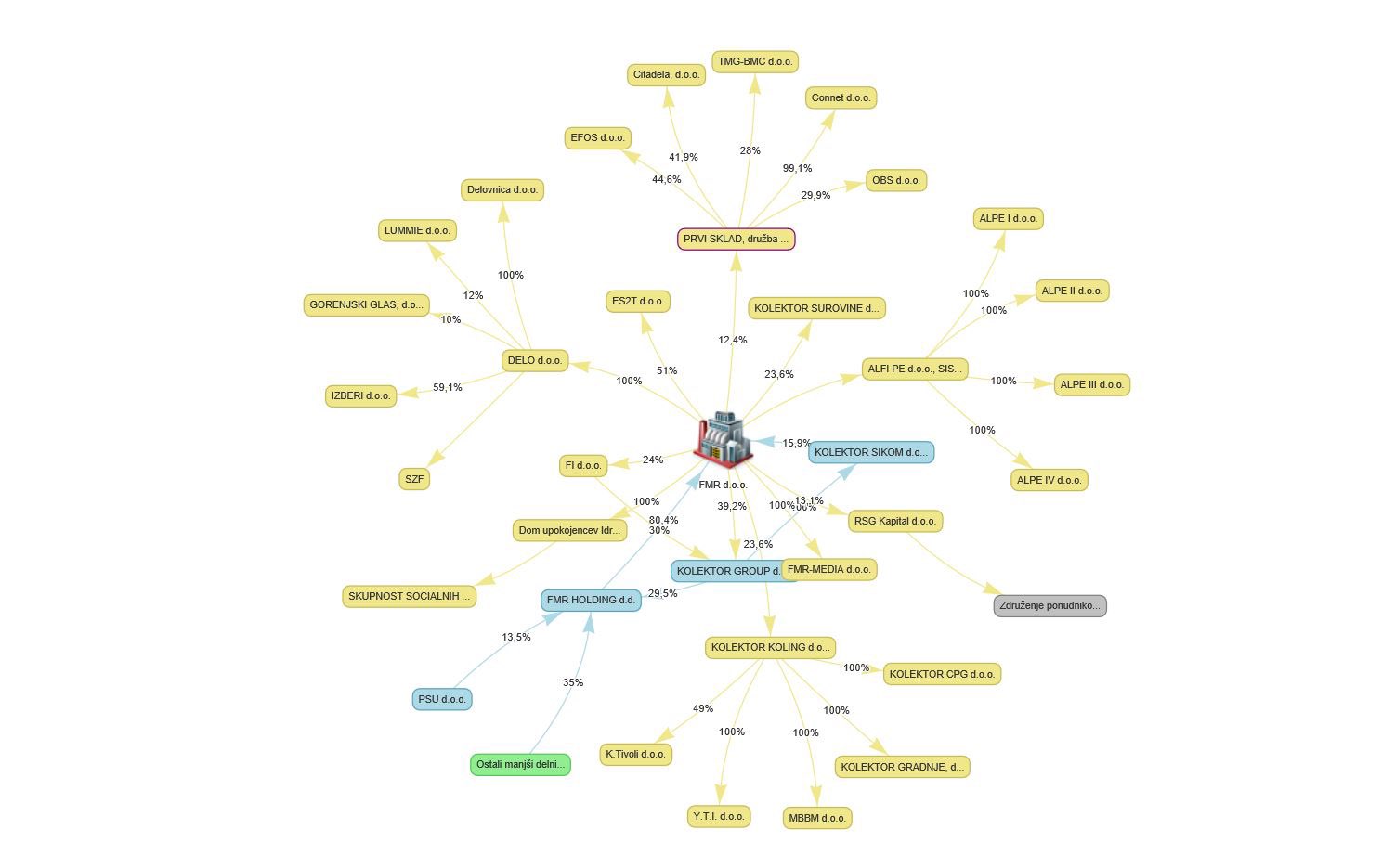 He has received more than 22 million euros at the expense of the pensioners in Idrija since 2012!
The second part of Petrič’s business network are the companies FMR and FI d.o.o. Fi d.o.o. is mainly interesting because of the final privatization of the company Etra 33. One hundred percent of the company is owned by Petrič, and his wife Nada is the director of the company. With it, he has earned just under 7,311,333.87 euros of taxpayer money, through Kolektor.

FMR is the umbrella company for the entire Kolektor company. All the important ownership shares that control Kolektor, were hidden in it. Through the newly established FMR Media company, Petrič bought another Slovenian taxpayer cash cow, the newspaper Delo. According to publicly available data, Delo has received more than 42 million euros from Slovenian taxpayers. With this, Petrič gained a powerful media weapon, with which to influence the Slovenian public opinion.

However, as the former editor-in-chief Uroš Urbas put it, Milan Kučan, Gregor Golobič, Aleksander Mervar, Zoran Janković and Petrič’s business partners, are as protected as the bears from Kočevje in Petrič’s Delo, so there are never any negative reports about them in the newspaper. However, we should not be surprised if the idea for the Constitutional Arch Coalition was actually Golobič’s, who has, according to Požareport, supposedly been trying to convince Damijan to become the new scapegoat for the greedy network of the deep state, for the past three months.

The entire financial complex of the FMR has earned more than one hundred million euros (101,695,381.37) from the Slovenian funds. What is also interesting is that the ownership structure of FMR is also earning good money at the expense of the pensioners. One of the many things that are owned by FMR d.o.o., is also the Idrija Nursing Home. FMR has been its owner since February 3rd, 2012. According to publicly available data, the aforementioned retirement home has so far received just over 38 million euros in state funds, and since 2012 alone, they have received more than 22 million euros in state funds (22,261,787.36).

The Idrija bandit is not interested in anything, except the earning of hundreds of millions, at the expense of the Slovenian taxpayers
Stojan Petrič is very motivated by his wish to have the key political decision-makers in his hands. The “citizen Kane” from Idrija does not want to accept the fact that the current government could ruin his long-time earning at the expense of the Slovenian taxpayers. And the legal proceedings in the Etra 33 case will soon begin, regardless of Petrič’s influence.

Therefore, we recommend Petrič to finally leave the Slovenian economic and political scene at the age of seventy and enjoy his well-deserved retirement.