(Public Opinion Poll) SDS Maintains Highest Support, LMŠ Is Sinking, and SD Has No Breakthrough Due to Its Radicalisation

The Parsifal Agency’s public opinion poll, conducted between the 12th and the 15th of October, clearly shows that if the parliamentary elections were to be held this Sunday, most respondents would vote for the largest coalition party, the SDS. This is proof that the party in question is good at leading our country through the difficult period of crisis. People appreciate the efforts of the government, which, through the adoption of appropriate measures, has preserved many jobs (more than 100,000) and ensured favourable economic growth. For the people of Slovenia, the SDS party represents strength, a quality programme, and a clear vision. Major shifts are also happening in the field of care for the elderly, in healthcare, and in the field of care for preschool children. The successes on the diplomatic floor are also worth noting.

When asked, “Which party would you vote for if the elections to the Slovenian National Assembly were to be held this Sunday?” most of the respondents answered that they would support the SDS party (20.7 percent), followed by the SD party (10.7 percent), Levica – the Left (6.3 percent), LMŠ (6.3 percent), SAB (3.3 percent), NSi (3.1 percent) and the Let’s Connect Slovenia Movement – Gibanje povežimo Slovenijo (3.1 percent). 35.7 percent of the voters remain undecided.

Stevanović would not do well in the elections
The category of “other” also includes the “Resni.ca” party (the Truth) and all other movements that define themselves as anti-vaxxer, anti-RVT condition (recovered, vaccinated, tested), and so on. These received a total of 1.8 percent of all the votes. As we can clearly see, if the parliamentary elections were to be held this Sunday, Zoran Stevanović would not do so well. Among the people who already know who they would vote for, the SDS party received 32.2 percent, the SD party 16.6. percent, and the Levica party 9.8 percent. LMŠ would receive fewer votes than Levica – only 9.7 percent, SAB 5.3 percent, NSi 4.9 percent, and the Let’s Connect Slovenija movement would receive 4.8 percent of all the votes from people who already know who they would vote for. 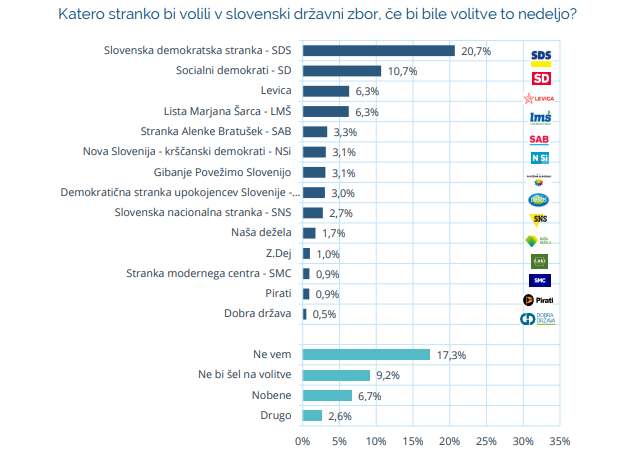 When it comes to people who would certainly participate in the parliamentary elections, the SDS party would receive the highest number of votes – namely, 25 percent, followed by the SD party (14.3 percent), Levica (7.9 percent), and LMŠ (5.9 percent). A smaller share of votes would also be given to the SAB party (3.9 percent), NSi (3.5 percent), and the Let’s Connect Slovenia movement (3.3 percent).

And among those who would certainly participate in the elections and already know who they would vote for, most would support the SDS party (33.2 percent), followed by the SD party (18.9 percent), Levica (10.5 percent), LMŠ (7.9 percent), SAB (5.1 percent), NSi (4.7 percent) and the Let’s Connect Slovenia movement (4.4 percent).

We also checked the support for individual parties and its fluctuation on three separate dates: the 18th of June 2021, the 2nd of September 2021, and the 17th of October 2021. The support for the SDS party amounted to 18.8 percent on the first date, then fell to 15.4 percent in June, and finally grew up to 20.7 percent in October.

However, in the case of LMŠ, we see a steady decline in support, from 11.6 percent to 7.7 percent, and finally to 6.3 percent. In the case of the Social Democrats (SD), however, there is a certain constant with negligible fluctuations. Thus, support for this party amounted to 10.8 percent on the first date and also on the second date, while on the third date, it fell by a tenth of a percent.

We also gathered some interesting data regarding the intersecting between the demographic and the content variable. It is interesting to note that men are more in favour of the SDS party (27.7 percent), SNS (4.4 percent) and SMC (1.7 percent), while women prefer the following parties: Sd (11.9 percent), NSi (3.2 percent), DeSUS (4.3 percent), SAB (4.1 percent), Levica (8.7 percent), and LMŠ (7.5 percent).

It is also interesting to note that the SDS party is most often supported by people in the youngest age group (18-34 years), from which as much as 26.2 percent support the party, while the SD party is mostly supported by people over 55 (13.2 percent). Part of this group also supports the NSi party (4.5 percent), and, understandably, DeSUS as well (5.1 percent). For example, the SNS and SMC parties record the highest support in the middle age group (35-54 years), the former 3.9 percent, and the latter 2.3 percent. SAB also has the most support among the oldest voters (4.8 percent), the Levica in the middle age group (6.9 percent), and LMŠ also among the oldest (7.1 percent).

We can conclude from the poll that the ruling SDS party, despite all of the efforts of the opposition and its media, continues to enjoy the highest support among citizens. People are not falling prey to left-wing propaganda. It is also clear that the LMŠ party is slowly sinking to the bottom, hence the recent signing of an agreement on the post-election cooperation of the opposition’s so-called Constitutional Arch Coalition’s representatives, which is, in fact, nothing more than a hysterical attempt of this party to retain its seats in parliament, and reflects fears of a possible “new face” and another “straw party,” which will probably also be just another political option without a single significant political player, without a diverse infrastructure among citizens, without tradition, without a youth section, without a serious programme (so with a programme that only has an emphasis on anti-Janšaism), and without a set of quality cadres that would gather around the “new leader,” who might not be the leader at all.

The poll also clearly shows that the ideological radicalisation of the SD party is not contributing to its popularity, which reminded us of what happened during the Borut Pahor government when the SD party showed greater openness and less ideological sharpness and therefore had higher support.

Survey: Environment not factor in choosing means of transport

By: P.T., STA A survey on Slovenia's energy efficiency (Reus) has shown that 25% of households are considering using public transport such as city bus...
Read more
Culture

Impossible Figures and Other Stories I wins Animateka’s main prize

By: J.S., STA The Jury Grand Prix of the 18th Animateka international animated film festival was conferred on Impossible Figures and Other Stories I by...
Read more
Slovenia

By: J.S., STA Fraport Slovenija's managing director Babett Stapel, who took over at the helm of the company operating Ljubljana's international airport in October, is...
Read more
Slovenia