Erjavec is misleading with the signatures of the DeSUS MPs: He was the only one who did not bring any signatures to Wednesday’s meeting!

The tragicomedy called “Karl Erjavec is searching for the signatures from his own people,” and with it, the tragicomedy called the Constitutional Arch Coalition (Koalicija ustavnega loka – referred to as KUL) continues. Even though after the meeting of the presidents of the KUL coalition parties, news first began to circulate that they had managed to collect 43 signatures from the MPs, it later turned out that the person who was already bragging with his signatures earlier, Karl Erjavec, actually did not have them yet.

On Wednesday, Karl Erjavec triumphantly bragged that he had secured four signatures from the DeSUS MPs, which he supposedly already received after the marathon torture of his deputies, but after the meeting of the presidents of the parties of the KUL coalition, it turned out that he actually did not have them yet. The reason for this is very tragicomical, just like the whole KUL story in itself.

Miha Orešnik, a journalist from the show Svet on Kanal A, first tweeted that the meeting between the presidents of the parties of the KUL coalition and Karl Erjavec was over and that Alenka Bratušek claimed that all 43 signatures for the filing of the vote of no confidence had already been collected. 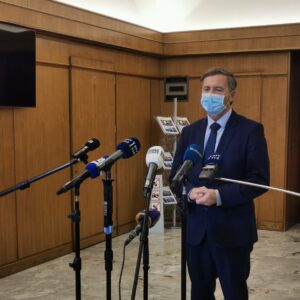 Signatures without the consent of the MPS
After a few hours, he tweeted that it later turned out that all the presidents of the parties brought the signatures of their MPs – everyone, except Karl Erjavec, who was supposed to deliver them before Friday, when the vote of no confidence would be filed. We soon found out why the sudden change, when the journalist and editor of Planet TV, Mirko Mayer sent out a tweet.

Mayer tweeted that Erjavec was saying that he had the four signatures from his MPs deposited but conveniently forgot to mention that the deputy signatures are always deposited. However, you still need the personal consent of each individual MP. On Wednesday, he did not manage to get consent from a single MP. He expected the signatories to sign a blank paper. Admit it; there is nothing else to say with news like this.

By UME A large-scale demonstration, organized by more than 200 civil society associations, took place in Madrid on Sunday 26 June under the slogan “We...
Read more
Focus

By Andrej Žitnik (Nova24tv) The Economist reports that Slovenia’s slide towards autocracy has stopped, and the economy is now roaring, which it attributes to the...
Read more
Focus

Nina Krajnik is also in the race for President of the Republic; she will run with the signatures of voters