How to get to the early elections faster, according to the LMŠ party? Propose Damir Črnčec for the position of Minister of the Interior an insist on it until the end.

If one could say that the SD party, its president Tanja Fajon and her biggest supporters Matjaž Han, Dejan Levanič, Dejan Židan, Matjaž Nemec and Marko Koprivc, want and believe that the vote of no confidence against the government of Janez Janša will succeed, so they can regain power and start filling up their pockets again, the opposite is true for the LMŠ and Levica parties. The SD party, however, is not aware of this, so Han proposed to the parliamentary group not only that they should photograph their ballots, but that they should also supervise each other in the secret ballot, which goes against all democratic principles.

Very few people believe that Karl Erjavec will manage to collect at least 46 parliamentary votes he needs in order to become the new Prime Minister and would therefore get to form a government. And even if he does succeed in getting the 46 votes, that is probably where it will stop. Erjavec will never actually get to have his own government. The Levica, SD and LMŠ parties currently have an exceptional opportunity to go to the early elections and get rid of DeSUS and SMC, while somehow also help the SAB party cross the threshold and then hope that that will be enough for the necessary 46 votes from the MPs for a radical left-wing government.

In order for them to succeed, in addition to the Levica party, which would make sure that there would be a vote or two too few for the forming of the new government, the LMŠ party is also playing a key role, in which Damir Črnčec has been explaining for a long time now, due to his personal hatred and resentment towards Janša, that he will do everything in his power to prevent Janša from ever being the Prime Minister while Slovenia presides over the European Union again. 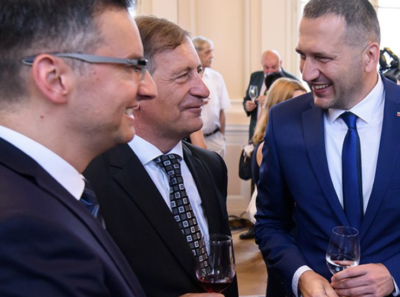 Črnčec for the Minister of the Interior – a bomb that would bring down the Constitutional Arch Coalition
Šarec and Črnec are willing to do practically anything to get rid of Janša’s government. However, they are only willing to participate in bringing down the current government, but not in the forming of a new one. Thus, the LMŠ party will support Erjavec in the secret ballot for the position of Prime Minister, and later, in the negotiations on the staff cut, they will do the necessary thing that will lead to early elections. They will propose Damir Črnčec for the position of the Minister of the Interior because they know that the other parties of the Constitutional Arch Coalition (KUL) will never accept him, and so the LMŠ party will be able to withdraw from the agreement, it will therefore not be possible to form a government, and early elections will follow.

Appointing Damir Črnčec for such an important position as the Minister of the Interior is a shot in the foot for the KUL coalition and for all democratic standards. Let us remind you how Damir Črnčec abused the intelligence and security services during his time as the State Secretary of National Security in the Prime Minister’s Office, which significantly contributed to the fall of the government of Marjan Šarec. As the chief of Police, Črnčec would probably see his position as Minister of the Interior primarily as a tool for achieving his personal goals and ambitions and bringing the LMŠ party back to the first place among the parties of the KUL coalition, and the other KUL politicians would once again find it difficult to fall asleep at night, as they would have to be prepared for the Police to show up at their door at 6.00 in the morning, with the intention of searching their house, while being accompanied by Anže Božič and Suzana Perman from POP TV, where Črnčec still maintains his influence.

Members of the so-called KUL coalition are aware of this. Therefore, KUL will never agree to Damir Črnčec being the Minister of the Interior, and the LMŠ party will never agree with him not being just that. Early elections would therefore only be a matter of time.