Brussels to put its hand on Europeans’ plates

The European Commission, together with the left-wing mainstream media, has started to propagate the idea that Europeans should learn to eat bugs.

Since three insects were declared fit for human consumption by the European Food Safety Authority in June 2021, a growing number of organisations and media outlets have started to promote the benefits of an insect-based diet instead of meat for European citizens. The European Union has taken to advocating insect eating so seriously that it is also working closely with the International Platform of Insects for Food (IPIFF), a non-profit organisation representing the interests of the insect production sector towards EU policymakers, European stakeholders and citizens. In their own words, “IPIFF’s main mission is to promote, inform and support the wider use of insects as a complementary source of protein for human consumption and animal feed.”

The organisation has published several papers over the past year on the benefits of the food industry rapidly transitioning to insect-based feed, and of Europeans giving up meat for an insect-based diet. Insects contain high levels of nutrients vital for human health such as protein, essential amino acids, fatty acids, vitamins and minerals, the information on IPIFF website reads.

“Edible insects have a well-balanced nutrient profile to respond to human’s dietary needs,” the organisation claims.

The also underline that insects are already part of the staple diet of around 2.5 billion people worldwide, but fail to add that in some densely populated areas, such as India or Africa, eating insects is a long established tradition. IPIFF hopes that insects may soon become a widely accepted component of western diets, including those of Europe. 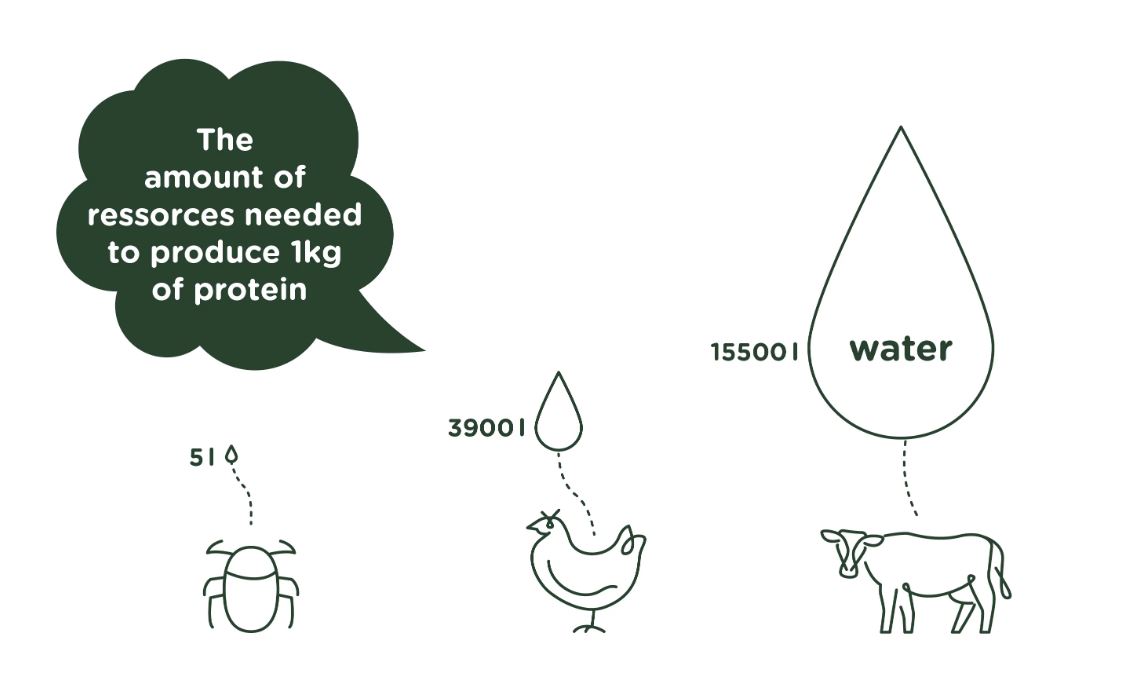 However, a healthy lifestyle is not the only advantage of the new foods, raising insects also requires far less energy and feed. Currently, 15,500 litres of water, 20 kg of feed and 250 square metres of land are needed to produce one kilogram of beef, while only 5 litres of water, 1.7 kg of feed and 3.6 m2 of land are used to produce one kilogram of insects suitable for human consumption. By emphasising this aspect and pushing insect eating yet another area for restrictions is being introduced by the Brussels elite to force ordinary citizens to save in the already energy crisis-stricken European Union.

The EU has also funded a project with almost 10 million euros under the Horizon 2020 programme to tackle the barriers to insect-based feed and food.

The overall project objective is to test, pilot and demonstrate recently developed technologies, products and processes, to recognise a high technology readiness level. The project focuses on these crucial activities, as well as living labs and workshops with stakeholders in the insect protein supply chain for feed and food, Susinchain’s website writes.

The Susinchain project hopes that “this will pave the way for further upscaling and commercialisation of the European insect sector, resulting in a replacement of animal protein by insect protein of 10% in animal feed and of 20% in human diets, and a thousand-fold increase in both production volumes and jobs in 2025,” the website adds.

Naturally, several research institutes and the mainstream media are also doing their part in persuading the Western World to eat insects.

The Guardian published an article a few days ago about mealworms and the discovery of a South Korean group of researchers. Mealworms, the larval form of the yellow mealworm beetle, have been cooked with sugar by the scientists, who found that the result is a meat-like flavouring that could one day be used on convenience food as a source of protein.

BBC also wrote about the topic, when it covered a project at Cardiff University and the University of the West of England aiming to encourage young people to eat insects.

Crickets, grasshoppers, silkworms, locusts and mealworms will be discussed with pupils as lunch time alternatives to traditional meat dishes during special workshops, BBC writes. Christopher Bear, of Cardiff University said: “We want the children to think about alternative proteins as real things for now, rather than just as foods for the future, so trying some of these foods is central to the research.”

Both BBC and The Guardian mentioned that eating insects would be desirable from an environmental and climate protection aspect. They pointed out that farmed animals traditionally need a lot of space, whereas bugs don’t take up much land, water or feed. What is more, unlike cattle, insect farming produces fewer greenhouse gases and because they reproduce quickly and have shorter life spans, they can be farmed in large quantities.

Besides the mainstream media and NGOs, the Food and Agriculture Organization of the UN also wants to persuade the Western World to consume insects.

There are, however, groups which would adopt laws outright banning meat eating. The green party politicians of the Bremen parliament have called on the residents to drastically reduce their meat, dairy and egg consumption. They believe that everybody should consume 75 per cent less animal-based foods and drinks. The party has also announced that it will soon start negotiations with its ruling coalition partners and the opposition about submitting the proposal.

Government and medical unions without agreement – Fides: “We are shocked by the events of the last week”

By: C. R., STA The government side and the representative trade unions of doctors and dentists did not reach an agreement today, said the head...
Read more
Important

Even in the second round of local elections, the left-wing party is not doing well: people are betting on experience, not just platitudes

By: Sara Kovač / Nova24tv After we went to the local elections last weekend, where in as many as 212 municipalities we decided who will...
Read more
Columnists

By: Matevž Tomšič A few months after the new government took office, we can say that this is the most ideologically profiled and exclusivist government...
Read more
Focus

It has begun: politicians are already “depoliticising” RTV

By: Sara Kovač /Nova24tv Sunday’s referendum results enraged many people that even before the laws came into force, they started openly “depoliticising” RTV. One such...
Read more

It has begun: politicians are already “depoliticising” RTV

By: Sara Kovač /Nova24tv Sunday’s referendum results enraged many people that even before the laws came into force, they started openly “depoliticising” RTV. One such...
Read more
Focus

MP Grims’s Response To The German Embassy Being Surprised By His Comments: “History Is There So We Can Learn From It; Otherwise, It Repeats...

By: C. R. Branko Grims, an MP of the Slovenian Democratic Party (Slovenska demokratska stranka – SDS), responded to the “surprise” of the German...
Read more
Focus

And So It Begins: Politicians Are Already “Depoliticising” Radio-Television Slovenia

By: Sara Kovač / Nova24tv Sunday’s referendum result has made a lot of people so excited that they have already started openly “depoliticising” Radio-Television Slovenia...
Read more
Focus

By: Tanja Brkić / Nova24tv Asta Vrečko posing happily next to one of the most despicable communist dictators of the 20th century. This is a...
Read more
Share
© © Nova obzorja d.o.o., 2021
Manage Cookie Consent
We use cookies to optimize our website and our service.
Manage options Manage services Manage vendors Read more about these purposes
View preferences
{title} {title} {title}
Go to mobile version