The mosque costing approximately 3 million euros is to be built near the city’s emblematic monument. The local Muslim community started a fundraising campaign because they lacked the funds to build it. The on-line action did not prove successful, so they are planning an in-person fundraiser on 31 October. After nearly a decade and a half of legal wrangling, with the left-wing municipality supporting the community initiative, while the right-wing tried blocking it, the court finally green-lighted the project and construction permits were issued on 16 June last year. The only remaining question now is funding.

The Islamic community of Pisa has started raising money for the construction of a new mosque in one of the oldest cities of Italy. The mosque would be built near the famous leaning tower of Pisa with a budget of some 2.8 million euros. The local Muslim community realised that they do not have the necessary funds, so they started an on-line fundraising campaign. The initiative, however, was not particularly successful, with only 8356 euros collected so far. 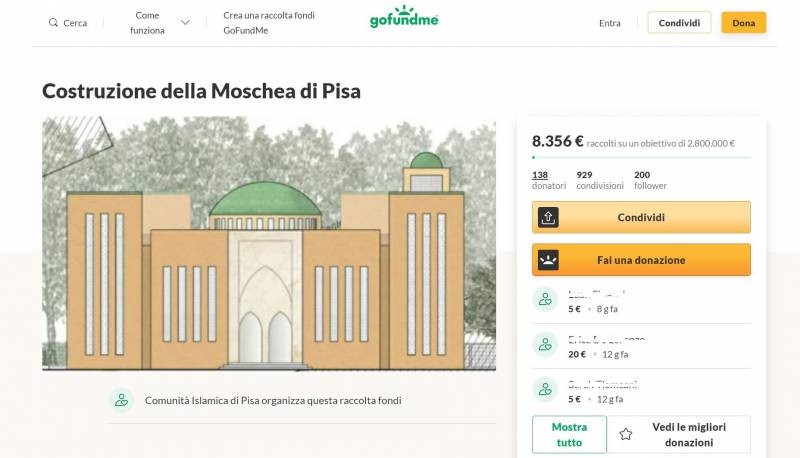 But that did not discourage them; they started another campaign. They announced a picnic for Sunday at the planned construction site, titled “A Sandwich for Religious Freedom.” They hope that those attending will be more generous. “We are looking forward to meeting everyone on Sunday, 31 October, at noon for a must-see event at the future site of the Mosque of Pisa. It will be a wonderful opportunity to meet, get to know each other and raise money for the project. We are unlikely to raise all the funds we need for the construction, but the symbolic value of the initiative is important,” one of the community activists wrote on social media.

The Muslim community in Pisa received permission to build the mosque on 16 June last year after years of foot-dragging and negotiations with, among others, the local council.

The idea of building a place of worship emerged in 2007 and received support from the leftist city administration. A large plot of land, classified as a green area at the time, was designated for the construction. In 2012, the town planning regulations were changed, reclassifying and earmarking the area for construction of the mosque. The local Muslim community purchased the plot of land in 2013.

In 2018, however, the project came to a halt after Michele Conti, supported by the centre-right coalition, took over mayorship of the city. The new administration refused to greenlight the construction – then in the planning phase – and banned the building of a mosque on the site.

The Muslim community turned to an administrative court, which brought a decision in the case last summer after long deliberations. The court ruled that the community could build a mosque on the plot of land they owned, citing freedom of religion and the growing number of Muslims living in Italy.

Figures from 2016 show that some 1.4 million Muslims live in Italy, amounting to 2.3 per cent of Italy’s population or nearly one-third of the country’s foreign populace. The number of mosques, however, is miniscule; there were a total of eight mosques in Italy in 2016. By comparison, France had 2200 mosques and the United Kingdom 1500 five years ago. The mosque in question is to be the first one in Pisa.