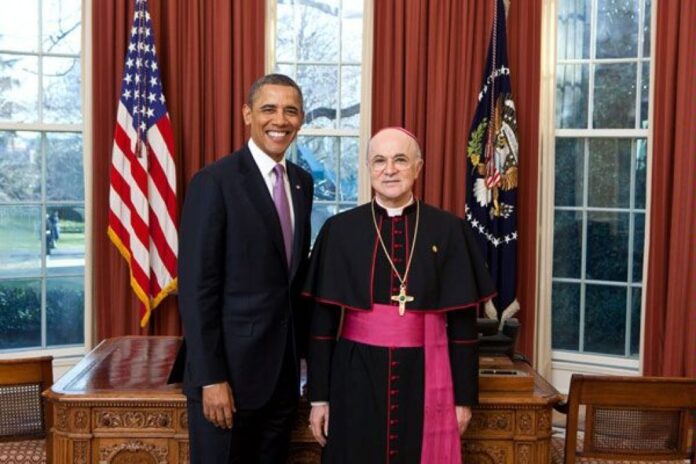 Former U.S. Nuncio Archbishop Carlo Maria Viganó has published names of some of Pope Francis’ most famous associates involved in a homosexual lobby in a recent open letter published by the Lifesite portal. Additionally, he revealed organizations receiving money from George Soros. Some media have reported how much money Soros has allocated to prevent Donald Trump’s new victory in the U.S. presidential election.

In his letter, he noted the recent media coverage of the Vatican financial scandal,“following which Jorge Mario Bergoglio – better known as Pope Francis – “removed Giovanni Angelo Becciu from his official posts.” He was succeeded by Venezuelan Archbishop Edgar Peña Parra, who, according to Vigano, is “even more blackmailable than his predecessor.” Archbishop Parra came to the Roman Curia in 2018, and despite his notoriety he became an influential member of the State Secretariat. As Archbishop Viganó reveals, Archbishop Parra was exposed as a homosexual even before his priestly ordination and was once even expelled from the seminary. However, this information was then concealed, and Edgar Peña Parra was ordained a priest and even sent to the Pontifical Diplomatic Academy, where future ecclesiastical diplomats are educated. In 1990, five years after his priestly ordination, however, he was accused of seducing two underage seminarians. Two years later another shocking revelation came to light: Edgar Peña Parra was allegedly involved with another well-known Venezuelan priest in the deaths of two people who were allegedly killed by electricity, however, their naked bodies were found in a position of performance of homosexual practice. His at the time Ordinary appointed his colleague Severyno as Diocesan Chancellor, giving him the power to destroy incriminating documents.

As Archbishop Viganóm reveals in the letter, in 2000 a journalost accused Edgar Peña Parra, along with some priests from the Diocese of Maracaib, of homosexual practices. The Apostolic Nuncio in Venezuela refused to receive the journalist, but nevertheless reported the controversial behaviour of the later archbishop to the Holy See. In 2009-2013, Archbishop Pietro Parolin, the current Vatican Secretary of State and one of the most influential people in the Holy See, served as Apostolic Nuncio in Venezuela. All the nuncios in Venezuela had documents at their disposal, which the Holy See was aware of, however, these documents did not prevent the diplomatic career of Edgar Peña Parra. Cardinal of Honduras Andrés Rodríguez Maradiaga, known for financial scandals, and today one of the main advisers to Pope Francis had allegedly covered for Edgar Peña Parra. Andrés Rodríguez Maradiaga was supposed to be in charge of reforming the Roman Curia.

How Soros financed “progressive Catholics”
Archbishop Viganó draws attention to another fact, namely how the George Soros Open Society Foundation in April 2015 transferred $650,000 to two “advanced” Catholic organizations (PICO and FPL) “to influence individual bishops to have public voices in support of messages of economic and racial justice for the purpose of beginning to create a critical mass of bishops aligned with the Pope. Cardinal Maradiaga, in his relations with PICO, was no stranger to this sort of interference by the aforementioned self-styled philanthropist in American politics, with the complicity of the pro-Bergoglian part of the episcopate,” Viganó said. “The two organizations receiving these payments were chosen – as the documents explain – because they are involved in long-term projects that have the purpose of changing “the priorities of the Catholic Church in the United States. The great opportunity was given by the Pope’s visit to the United States [in 2015] and the Soros foundation explicitly aimed to use the good relationship between PICO and Honduran Cardinal Oscar Rodriguez Maradiaga, one of Pope Francis’s closest advisers, to “engage” the Pontiff on themes of social justice.”

How has Peña Parra built his career since the early 1990s? From 1993 to 1997, he was sent to the nunciature in Kenya on a diplomatic mission. In 1995 he was awarded the title of monsignor, in 1999 he was sent to Geneva as a member of the papal mission to the United Nations. In 2002, he was appointed a member of the nunciature in Honduras, and in 2006 he went to the nunciature in Mexico. He was ordained a bishop in 2011 and was appointed nuncio to Pakistan, and then in 2015 to Mozambique. On October 15, 2018, on the recommendation of Cardinal Maradiage, Pope Francis appointed him Deputy Secretary of State. According to the judges of the Holy See, he played a key role in the years 2018 to 2019 “in several financial decisions that caused the Vatican coffers to lose over 100 million euros.” Vatican Secretary of State Parolin bears direct responsibility for this, Archbishop Vigano claims.

The former nuncio to the United States also wonders whether the pope’s statements on homosexual relations, which many considered a “misunderstanding” and “tearing out of context,” are influenced by “the impressive number of homosexual prelates with whom he has surrounded himself even in his residence at Santa Marta, beginning with his personal secretary Msgr. Fabian Pedacchio, who was suddenly removed and vanished into thin air.” All of these scandals show that the pope “wants to legitimize LGBTQ ideology not only in order to support the globalist agenda and demolish the immutable principles of Catholic morality, but also in order to decriminalize the crimes and abuses of his collaborators.” Viganó also wonders if the pope himself is being blackmailed. “This would explain the motive that leads the one who sits on the Throne to rage with so much ruthlessness against the Church of Christ, while showing the greatest respect for people who are notoriously corrupt, perverted, and almost always implicated in sexual and financial scandals,“ observes Viganó. He also wonders whether the pope’s “choice to surround himself with people given over to vice, who are therefore blackmailable, is a deliberate one, and that the ultimate goal that he pursues consists in the demolition of the Catholic Church, replacing it with a sort of philanthropic and ecumenical NGO that is subservient to the globalist élite. Faced with this betrayal by the one who holds the Papacy, any effort at transparency and clarity, if it is to be effective, cannot exclude the one who for over seven years has proclaimed by his words that he wants to clean up the Vatican and the Church.”