The role of Gregor Golobič – operative of the head of the deep state, Milan Kučan – in the wannabe KUL coalition 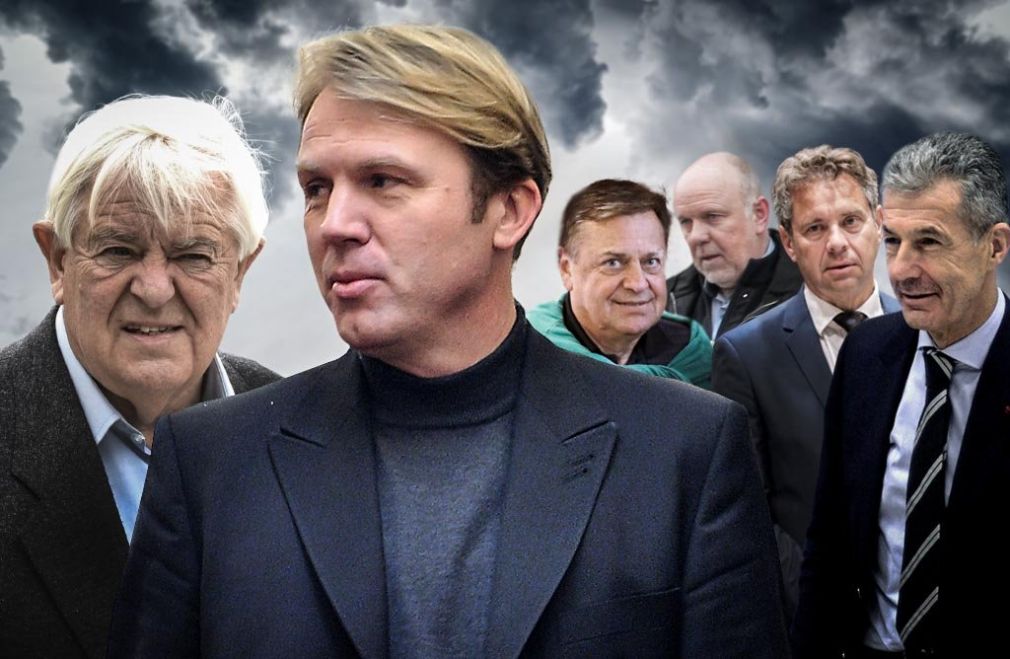 When Stojan Pelko joined Jože Damijan for a meeting with the Deputy Prime Minister, Minister of Foreign Affairs and president of the NSi party Matej Tonin, all traces of doubt disappeared: Gregor Golobič is leading the overthrow of the centre-right government, and the head of the deep state Milan Kučan, is pulling strings from the background. Namely, Stojan Pelko is a former prominent politician of the LDS and Zares parties; he has been the loyal staff and an ally of Gregor Golobič for many years.

Who is Gregor Golobič, who is very reluctant to appear in public and who has avoided the limelight since the miserable end of the Zares party? Who is the man who was already trying to overthrow the Demos government in 1992 (working with Jožef Školč and Tone Anderlič), and did this in a similar way to now, when he is fighting the current team on Gregorčičeva street in Ljubljana? So, let’s remember who he is and what he has done. And how did him and Jože Damijan find each other?

When Golobič testified before the Parliamentary Commission of inquiry in the TEŠ6 case, Jože Damijan could not hide his excitement regarding Golobič. “He was well-prepared, armed with facts and documents, and in the mood to directly name the culprits by name and surname, and to clearly highlight their primary interests,” he wrote on his blog, while also sharply attacking Matej Lahovnik.

When Damijan became a king of party economist of the Levica party, this supposedly happened because of Kučan and Golobič’s recommendation. Luka Mesec’s party was “underfunded” in economic knowledge, so Kučan, who has long praised the Levica party, was looking for a suitable economist for them. Damijan, who made a turn from a young economist (liberal in the economic sense) to an advocate of purely socialist ideas (he is a fan of the former Greek Minister of Finance, Yanis Varufakis) a long time ago, became the perfect fit for the position. He is a man with no charisma, who knows how to take care of himself financially, so he is perfectly suited to play the role of Marko Voljč from 1992. Voljč, a banker and economist from Washington, where he headed the department for Central America and Panama, was nominated for the new Prime Minister by a group of “independent” deputies in February of 1992. He was expected to replace Lojze Peterle from the Demos government. Then-President of the Republic Milan Kučan, the leadership of the LDS party, and the renegades of the Demos party (the Hribar couple, for example) were behind the manoeuvre at the time. But Voljč was merely the cannon fodder, an introduction to another vote of no confidence, with which the transitional left finally managed to achieve what it wanted to in its third try when Janez Drnovšek appeared as a candidate. Golobič became the general secretary of the LDS party, and Voljč was also richly rewarded for this “game” – in September 1992, he became the president of the management board of Nova Ljubljanska Banka. Jože Damijan is now in a similar position, as he is being “pushed” on the public by the mainstream media, who are simultaneously also “loosening” the ruling coalition led by Janez Janša. What the reward will be for Damijan when he is cut off, is not yet known.

But let us focus on Gregor Golobič for now.

Gregor Golobič never gave up on politics and the influence he had and still has. Officially, he has not been seen anywhere in a long time, as he considers himself to be an entrepreneur now, but as an operative for Milan Kučan, he is still leaving his fingerprints behind – everywhere. One such area is the mainstream media, which he is still controlling. This includes the private television station POP TV, even though he was supposedly a little nervous after the change of ownership. But for now, POP TV is still promoting Jože Damijan and is still very anti-government. In other words, POP TV will always do what Gregor Golobič told it to do (no matter who runs it or who the editor is).

This was proven to be true, for instance, years ago, when POP TV dared to report on the story of Ultra and the lies of Gregor Golobič. Sanctions followed quickly, and following Golobič’s orders, the show Trenja (friction) was cancelled. Golobič referring to the Kanal A channel as “sewage” was apparently all it took for the then-boss Tomaž Perovič and the other leaders at the TV station to listen to Golobič, and from then on, only those who did not threaten the interests of the transitional left and who consolidated power in the then-Pahor government came to the commercial television station. Tomaž Perovi, fully under the influence of Golobič, played a very dirty (political) role. When the time for early elections in 2011 approached, the TV station very strongly supported the “product” of Milan Kučan, Zdenko Roter and Gregor Golobič – Zoran Janković and reported on him almost minute by minute. The disqualification of SDS and Janez Janša, on the other hand, was understandable. In the end, “they” achieved Janković’s victory, but not him actually becoming the Prime Minister, although they kept urging both Karel Erjavec, as well as Gregor Virant to join the new, “winning” option of the left-wing bloc. Golobič has a similar influence on RTV Slovenia, Delo, Dnevnik and Večer.

Staffing in the parties
As Milan Kučan’s operative, Golobič also has a great influence in picking and creating “new faces” and new political parties. It is thanks to Golobič that many Zares MPs landed in the Positive Slovenia party. Which makes perfect sense, if we consider the fact that Golobič helped create Zoran Janković – both at the local, as well as the national level.

He and Kučan also participated in the creation of the party Verjamem (I believe), which was led by Igor Šoltes (who later became an MEP and was even considered one of the options for the new Prime Minister for a while), and in creating possible connections with other, smaller parties before the elections. He was also involved in the formation of Miro Cerar’s party and was “close-by” when the “creation” of Alenka Bratušek and Marjan Šarec (LMŠ) happened.

What does Zdenko Roter think about Golobič?

Gregor Golobič’s influence is big. It always has been. But because this influence is not transparent and is far from the public eye, it is all the more sinister, which is also described in the book Fallen masks, written by Zdenko Roter, Milan Kučan’s former adviser.

“I advise and participate in the export of technological solutions in the field of mobile transaction systems,” Golobič often answers questions about how he makes a living. In the past, there was the infamous Ultra, which went bankrupt in November 2015, following the decision of the District Court of Ljubljana. And it was Ulta that, years ago, almost shook the foundations of Gregor Golobič’s apparent principles. After the late Janez Drnovšek said goodbye to his post of Prime Minister, Golobič was employed at Ultra between 2003 and 2008, and he was also its co-owner, through the Dutch company Ultra SUM. In regard to these years, he later said that they were constantly being harassed by the government of Janez Janša and that the SDS was behind the later Ultra affair. Which has, of course, proven to be a lie by the numbers, as the Zagorje company was doing its best at that very time. Profits were not high, but according to the results, they probably accumulated in companies abroad, for which there is no available public data.

If Ultra or any of its companies messed up, they found a suitable state-owned company or a company where the state has a decisive influence and got it to buy the Ultra company. One such company was En Plus, founded by Ultra, which was later taken over by the company Hram Holding. The company, in which Janez Kopač was the procurator for some time, was operating at a loss all the time. But would you look at that, suddenly, a benefactor in the form of Mercator appeared, who saw a business opportunity in the company making a loss. At the time, it was led by Žiga Debeljak, who bought En Plus for two million euros in August 2011, when Golobič was the minister in resignation. There are still a lot of state-owned companies left, that are in favour of Golobič’s (business) ideas even now, but we will write about them some other time.

On the estate of which entrepreneur (far from the public eye) do the conspirators meet and why is this entrepreneur important for the deep state?

Which coalition MPs are being controlled by the lower-ranking deep-state operatives and what are they offering them, in exchange for giving up the support for the centre-right government?

Who are the members of the core group of current and former politicians, entrepreneurs and managers, who are working on scenarios on how to overthrow the government of Janez Janša?

With which two party presidents does Milan Kučan talk on the phone daily?

The catastrophic migration situation in Slovenia

By A. S. Illegal migration in Slovenia has increased by 161.1% this year, with 21,467 illegal border crossings recorded by the end of October, compared...
Read more
Focus

By: Gal Kovač / Nova24tv For all the concern that the government of Robert Golob expresses about the terrible situation in the property market, it...
Read more
Focus

The Chamber Of Commerce And Industry Has Also Given Up On The Government – Aid To The Economy Is Just A Bluff For Forced...

By: Aleš Žitnik / Nova24tv The Chamber of Commerce and Industry is well known for the fact that it very rarely speaks up when left-wing...
Read more
Focus

By: Gal Kovač / Nova24tv If we had followed only the dominant media, we would have gotten the impression that the meeting of the National...
Read more

By: Gal Kovač / Nova24tv For all the concern that the government of Robert Golob expresses about the terrible situation in the property market, it...
Read more
Focus

The Chamber Of Commerce And Industry Has Also Given Up On The Government – Aid To The Economy Is Just A Bluff For Forced...

By: Aleš Žitnik / Nova24tv The Chamber of Commerce and Industry is well known for the fact that it very rarely speaks up when left-wing...
Read more
Focus

By: Gal Kovač / Nova24tv If we had followed only the dominant media, we would have gotten the impression that the meeting of the National...
Read more
Important

Orbanisation Is No Longer A Problem, And Golob Even Shielded Orban From Uncomfortable Questions

By: Ana Horvat / Nova24tv here is no end in sight for the hypocrisy of the left – it is their modus operandi. For the...
Read more
Share
© © Nova obzorja d.o.o., 2021
Manage Cookie Consent
We use cookies to optimize our website and our service.
Manage options Manage services Manage vendors Read more about these purposes
View preferences
{title} {title} {title}
Go to mobile version