This Can’t Possibly Be True, But It Is: The Dutch Government Will Award A Human Rights Prize To Slovenia’s Proto-Communist Political Cyclists

Just when you start to believe that Western countries could not be more naïve than they already are, you realise that, in reality, the liberal delusions really know no end. At a ceremony in Miniteater, the ambassador of the Dutch government in Slovenia will present the Tulip award – a prize for human rights – to one of the wild Slovenian political cycling anarchists who had been terrorising the streets of Ljubljana for two years and breaking anti-corona legislative measures.

Let’s think back for a moment – while the whole covid situation was at its peak, and the conditions were the worst, when we were all collectively refusing to socialise, even with our loved ones, in order to stop the spread of the virus, the people from this group of extreme leftists were calling on others to join them on the streets and then paraded around Ljubljana with no particular idea of what they actually want, other than to demand the resignation of the right-wing government and an end to the anti-corona measures, which they perceived as “repression.” 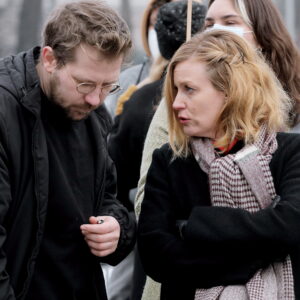 The protests, which they created together with the activists at Radio-Television Slovenia (many of the journalists who worked on this are now part of the ruling authorities), turned the streets of Ljubljana on Friday afternoons into a Parisian ghetto, which meant that young families no longer dared to go out in case they encountered the wild anarchists. The cars of “hostile” news outlets were being attacked, our cameraman almost had his camera stolen by the extremist Zlatan Čordić – Zlatko, and the epicentre of discontent over the anti-corona legislative measures, which had long been instigated by the political cycling crowd, happened in November 2021, when thugs began to break into the streets of Ljubljana, destroying property and brutally physically assaulting journalists. 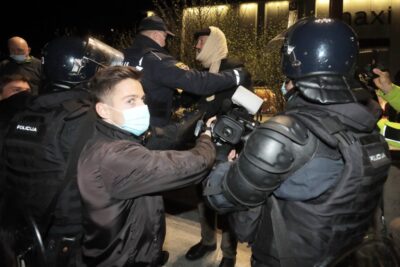 They were rewarded for their savagery and disregard of the anti-corona security measures by the new government, which built its legitimacy on “freedom” from the corona measures. But we can somehow understand the actions of the Slovenian government – since it is nothing but a group of far-left opportunist agitators who, in a silent coup d’état, together with the mainstream media and the “civil society,” which the Dutch embassy is now rewarding, completely took over the leadership of our country. What is more difficult to understand, however, are the actions of the Dutch government, especially in light of what happened in the Netherlands.

The protests were marked by far-left fanaticism
It is true that the protesters were linked to the left-wing establishment, but their basic message was identical to only one of the National Assembly’s parties – the Left party (Levica). The party was also the source of all this far-left savagery. As the President of the Slovenian Democratic Party (Slovenska demokratska stranka – SDS), Janez Janša, pointed out, this is a scandal because the liberal Dutch government is giving a prize to far-left radicals who decorated their illegal protests with totalitarian communist symbols and were never anything other than a group of “silovik”, who wanted to throw out the legitimately elected authorities by using totalitarian methods on the streets. What the Dutch liberals probably do not know is that these people are a group of anti-Western radicals who flirt with Russia and are fiercely opposed to Western alliances, such as NATO. They are also fiercely opposed to market capitalism. 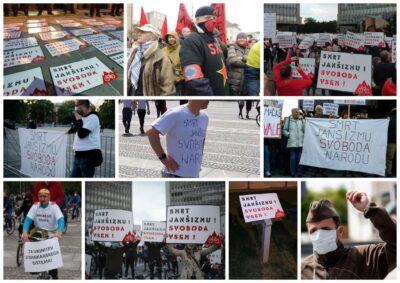 The Dutch government shot at the protesters
And to add to the irony, it should be pointed out that nothing happened to any of the protesters, not even to Jaša Jenull, who had to act out his “brutal” arrest, where he was removed by the police for violating law and order. On the other hand, the Dutch government of Prime Minister Rutter brutally repressed the anti-corona protests in Rotterdam – they did not only use water cannons but also police batons, with which they brutally beat up the protesters and even shot at them – three people ended up in the hospital with serious injuries. At the time, both the liberal Mark Rutte and the socialist Mayor of Rotterdam, Ahmed Aboutaleb, justified the police violence.

An insult to the Slovenian state
It is, of course, a grave insult to the Slovenian nation that such an award will be given to the far-left protesters, who have all together prolonged the agony of COVID-19. Not only are they not human rights activists. Such an award is a spit in the face of Slovenia’s parliamentary democracy because it portrays a legally elected government as authoritarian and, at the same time, portrays the police as the repressive apparatus of an authoritarian regime. Those of us who live in Slovenia know how ridiculous such claims really are.

By: Dr Andreja Valič Zver With the announced politically directed “merger” of two museum institutions, it is difficult to remain silent. Not only that, as...
Read more
Important

Assembly for the Republic: The vote AGAINST will prevent media unanimity, the abolition of long-term care, and the distribution of “chairs” for those who...

By: Gal Kovač / Nova24TV A round table of the Assembly for the Republic took place with the meaningful title: Why we are AGAINST. Žiga...
Read more
Important

SDS: STOP the manipulations, on Sunday we all vote AGAINST taking rights that are already legalised

By: C. R. All three laws, which will be decided in the referendums on Sunday, November 27th, impoverish Slovenia and impoverish people! Therefore, we believe...
Read more
Columnists

By: Lea Kalc Furlanič Anyone who does not wear blinkers but follows the flood of announcements about RTVS on social networks and in all media,...
Read more

Assembly for the Republic: The vote AGAINST will prevent media unanimity, the abolition of long-term care, and the distribution of “chairs” for those who...

By: Gal Kovač / Nova24TV A round table of the Assembly for the Republic took place with the meaningful title: Why we are AGAINST. Žiga...
Read more
Important

SDS: STOP the manipulations, on Sunday we all vote AGAINST taking rights that are already legalised

By: C. R. All three laws, which will be decided in the referendums on Sunday, November 27th, impoverish Slovenia and impoverish people! Therefore, we believe...
Read more
Focus

By: Sara Kovač / Nova24tv According to the information of our reliable source, on Thursday, the Health and Social Security Commission of the Slovenian Federation...
Read more
Focus

Lots Of Slovenian Environmentalists Oppose Golob’s Subjugation Of The Energy Sector – That Is Why They Are Calling On Everyone To Vote Against The...