Since early this year, the number of boat crossings on the English Channel from France to the UK has risen sharply. In the past two days alone, nearly a thousand people made the dangerous journey. Human smuggling gangs steal boat engines to “upgrade” dinghies for transporting migrants across the Channel.

UK is experiencing an influx of migrants on an increasingly worrying scale. In the past two days alone, nearly a thousand migrants reached UK shores after surviving the dangerous crossing of the English Channel in small boats.

BBC reporter Simon Jones published the most recent figures on Twitter, adding that UK Immigration Minister Chris Philp and clandestine Channel threat commander Dan O’Mahoney travelled to northern France to get answers from French authorities as to the cause of the change.

According to the BBC journalist’s tweet Chris Philp met with French law enforcement agencies to ensure that the new UK funding, which has doubled French patrol numbers and meant greater intelligence sharing, delivers results for the British public.

In a recent video call, French Interior Minister Gerald Darmanin and UK Home Secretary Priti Patel agreed to take joint action to stem migrant Channel crossings. According to the deal, the UK will pay France 55 million pounds, the equivalent of 62,7 million euros, in 2021 and 2022 to procure adequate equipment to combat illegal migration while the French pledged to intensify patrolling along the French coast.

Despite the introduced measures, the flow of migrants between the two countries has not eased. In fact, the BBC reported on Wednesday, 4 August, that a record number, 482 refugees arrived on 15 boats from France, while Thursday’s count was nearly the same at 475. According to data published by the UK Home Office, 10,711 migrants arrived in the country on more than 440 vessels so far in 2021. French authorities detained 138 people on Thursday. The flow of migrants has increased dramatically over the past two years, while in 2019 less than two thousand refugees arrived in the UK, last year a bit more than eight thousand people crossed the Channel, and in 2021, more illegal immigrants than ever have been heading for the UK. 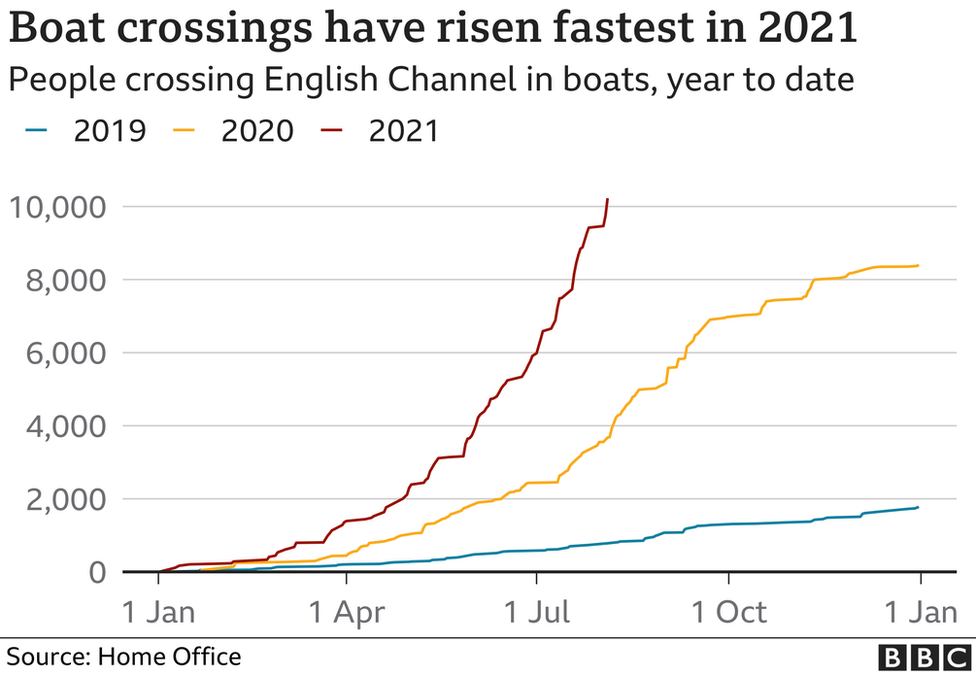 Bella Sankey, the director of the humanitarian organisation Detention Action, reported that the overall number of asylum requests has decreased compared to the early 2000s, but the number of refugees crossing the Channel shows that they are willing to risk everything to get to the UK.

This is confirmed by the French newspaper France Bleu, which reports in an article that since the beginning of the year, some fifty boat engines have been stolen by human smugglers in the Pas-de-Calais departement in northern France. French authorities have already arrested more than ten people in connection with the thefts, with all perpetrators linked to smuggling gangs transporting migrants across the English Channel. Arnaud Gavois, the police chief of Saint-Omer, one of the municipalities concerned, said that with the arrests the number of stolen boat engines has decreased in the area but has not stopped completely. Mr Gavois thinks the most effective way to prevent thefts would be for owners to remove the engine or to lock the boat in a secure place. He also asked boat owners to write down the details of both boats and engines in order to facilitate owner identification in case of theft.

By: Blagovest.si On Thursday, January 20th, 2022, 70 years have passed since the burning of the then Bishop of Ljubljana, Msgr. Anton Vovk in Novo...
Read more
Columnists

By: Franci Kindlhofer In 1939, Stalin and Hitler concluded the Non-Aggression Pact, of which the secret additional protocol was the spark that ignited war throughout...
Read more

By: Franci Kindlhofer In 1939, Stalin and Hitler concluded the Non-Aggression Pact, of which the secret additional protocol was the spark that ignited war throughout...
Read more
Must read

By: V4 Agency Leaders of the European Union are increasingly applying double standards, which is being felt by the member states' citizens, according to an...
Read more
Columnists

By: Štefan Šumah Our leading socialists have risen to a higher level in their evolutionary development. From salon caviar-socialists they became armanisocialists (they added exclusive...
Read more
Share
© © Nova obzorja d.o.o., 2021
Go to mobile version