Migrants in central Milan and its outskirts have become a growing problem of late. They occupy vacant buildings and settle in public parks, where they hurl bottles at police and assault passers-by.

In Milan, police were forced to intervene after a gang of youngsters from Central Africa demonstrated provocative behaviour in front of a fast food restaurant in the city centre. The youth first hurled stones and bottles at the officers and then provoked fighting. Police arrested twelve people for violating the government’s coronavirus restrictions.

However, some blame the police for what they describe as their violent intervention. Publishing a video of the incident on Instagram, pone influencer said it was “futile for Italy to claim to be innocent in terms of racial discrimination and abuse of power”. In her seven-minute video, the young woman explained that law enforcement officers have a tendency to discriminate against black people.

“We sat at a table in the restaurant after we paid our bill, but we were forcibly thrown out. A boy was pushed to the floor and four officers began kicking and beating him. A girl was badly hit on the head. Police were apparently after people and wanted to beat up everyone. Those poor boys tried to arm themselves with bottles they removed from the waste bin. ‘Go back to your country,’ the officers yelled in the end. All in all, we can say that racism does exist in Italy,” she said in the video, adding that “Every policeman is a scoundrel”.

However, some of the comments posted under the video describe the incident differently: “You forgot to tell how it all began, with your aggressive friends beating up my friends, even though they did nothing”. Another user added a missing piece of information to the footage, saying “the recording fails to show the massive fighting that unfolded half an hour earlier, involving roughly fifty people. Law enforcement forces only intervened at this point”.

“They always throw the same insults at the officers. They call them fascists, bastards, shithead cops, gangsters. The officers are prepared for what’s to come… that they will be pelted with cobblestones, rocks and bottles,” one source told the daily Il Giornale.

“Despite all the atrocities against us, we have become the problem, instead of the criminals and the real troublemakers. Politics seems to forget about our working conditions. We need clear guidelines regulating our operations. Our agents in the streets are risking their lives when they try to maintain law and order, and all they get is bottles thrown at their heads,” said Ilario Castello, local secretary of the police union.

Milan also faces another problem, as migrants continue to occupy more and more public buildings. Most recently, they moved into Piazza della Repubblica, where they typically spend the nights in sleeping bags. In the capital of Lombardy, illegal migrants are also encroaching on public spaces, using more and more public areas for dwelling purposes. Local residents have tried to contact the municipality through different channels in order to resolve the situation that is becoming increasingly critical.

Many turned to MEP Silvia Sardone, who carried out inspections in the area to find out about the appalling conditions. “The residents of the area surrounding Piazza della Repubblica have been telling me for days about dozens of immigrants sleeping in the gardens nearby. In fact, what I see is very telling and not the most appropriate for a city struggling to recover from an economic crisis,” Ms Sardone said, on behalf of the right-wing Lega party.

The square is connected to the central railway station through an arcaded street full of shops and trendy clubs, and dozens of homeless people find shelter there every day. “The situation between the central station and the Piazza della Repubblica is now alarming. Where is the so-called reception model of Milan that the mayor bragged about? Poverty is rising, but the city management does not care,” Ms Sardone continued. 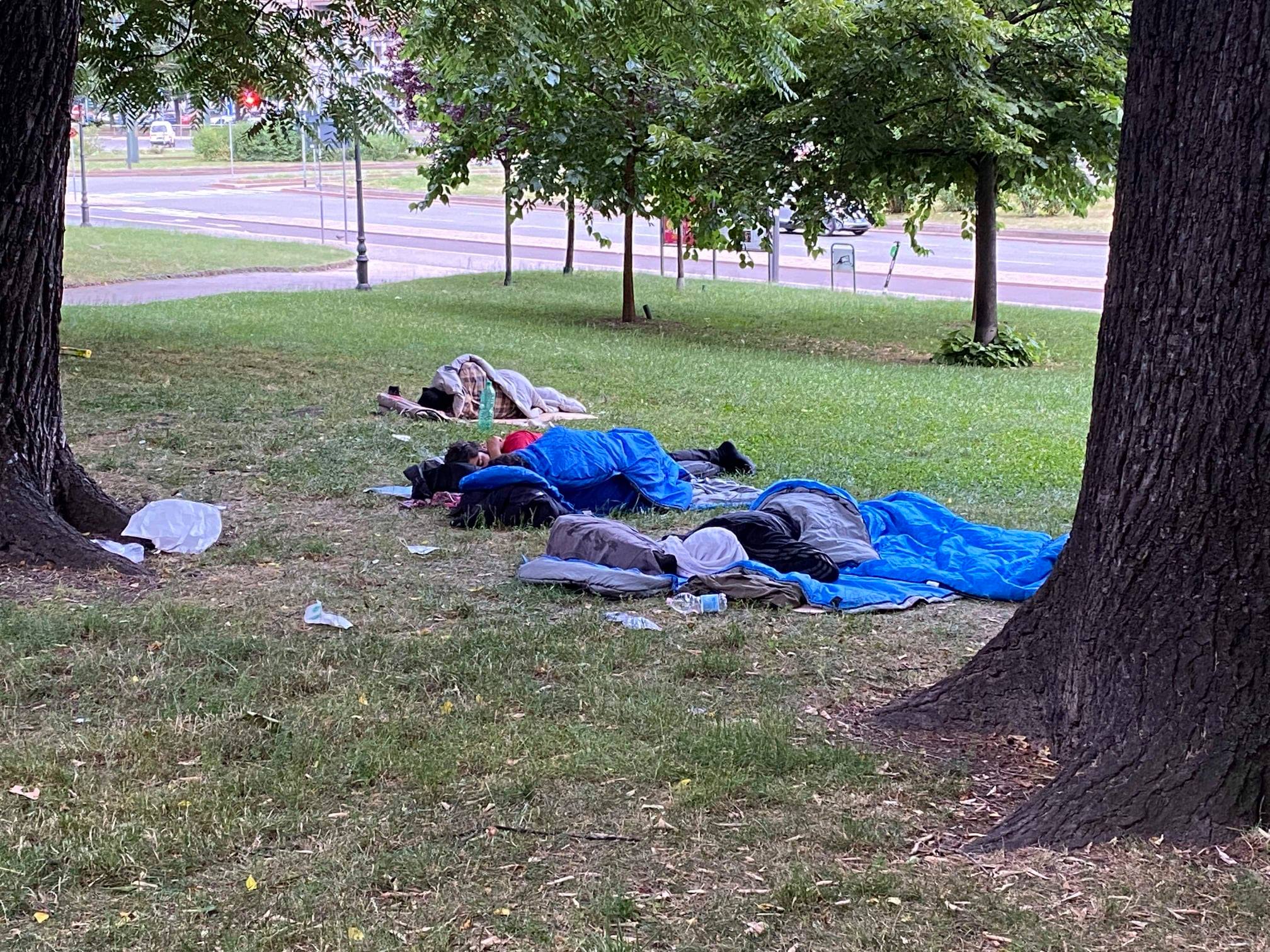 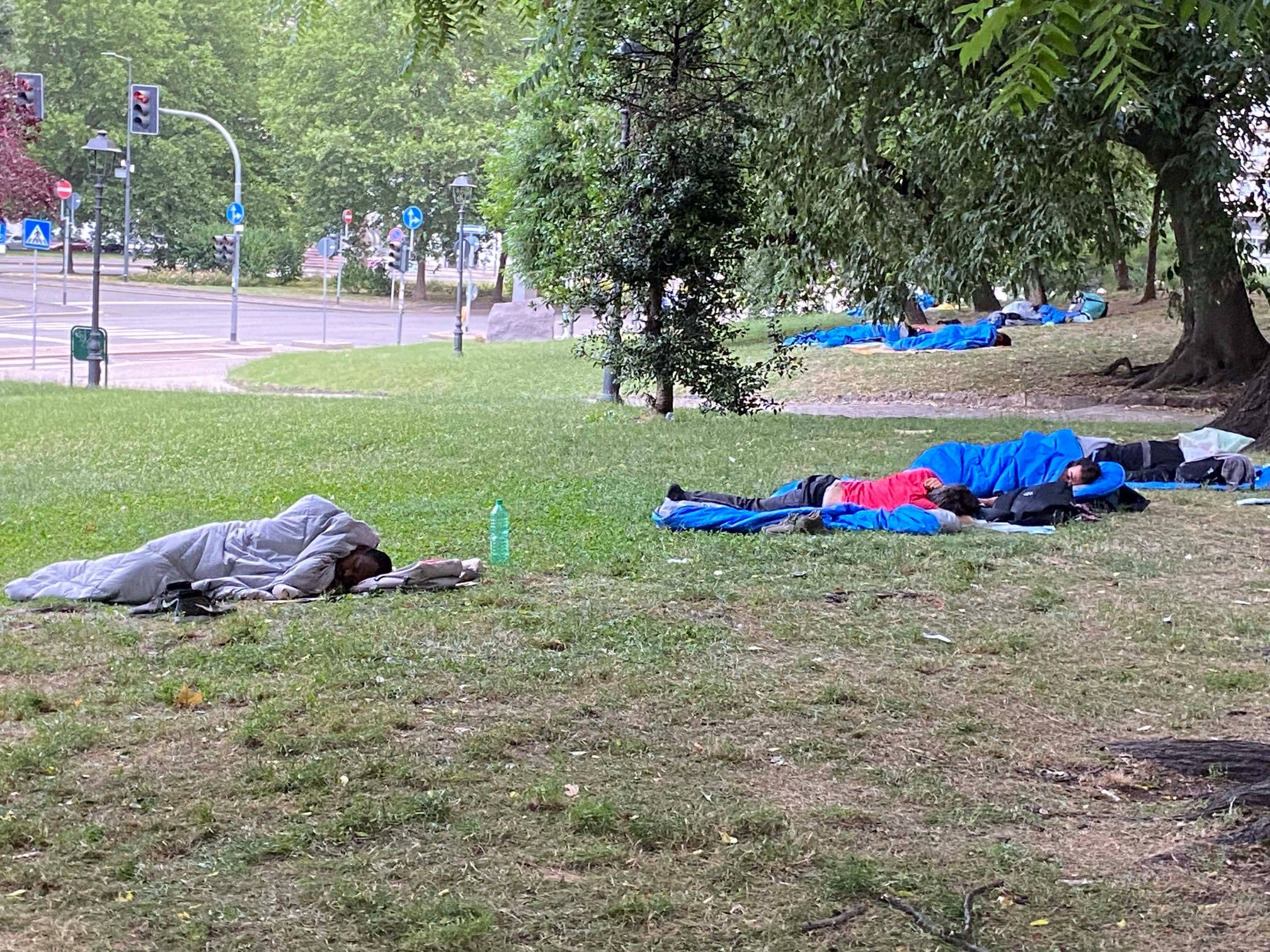 Milan’s public parks, as well as the suburbs’ empty and unfinished buildings, have been occupied by undocumented migrants.

Crescenzago is located on the eastern side of Milan, a mere six metro stops from the central station. Despite being a suburb, the area is well connected to the city centre, but it is becoming abandoned. Silvia Sardone, Samuele Piscina and Alesso Ruggeri inspected the area together.

The building they visited – a huge house on the corner of Via Meucci and Via De Notaris, a few hundred metres from the canal – is one of Milan’s many abandoned buildings in neglect.

“The building has been abandoned for years and, for a while now, it has been occupied by illegal immigrants, mostly from North Africa. The municipality acknowledged the occupation of the building long ago. They undertook to monitor the situation, but did not block the entrances, anyone can enter. We met people who have been staying here for months after crossing the Mediterranean Sea illegally. This constant deterioration is unacceptable,” Ms Sardone explained.

She issued a joint statement with Samuel Piscina, pointing out that “there are beds in every floor of the buildings, even on the roof. Mattresses and waste, as signs of infinite disruption, are scattered everywhere, This has become another location in Milan where state laws are not observed.”

Ms Sardone, who undertakes regular field trips to inspect Milan’s suburbs to monitor the situation, has come to the conclusion that although “the left-wing is high on propaganda about reception, the illegal migrants often end up in the suburbs where they must support themselves with illegal activities. For years local residents have only received promises, instead of action. The priority is to protect such areas before something serious happens. Suburbs also have to be protected, and not played into the hands of thugs and migrants.”

By: Lionel Baland Geert Wilders is a member of the Dutch Parliament and the leader of the PVV, the Party for Freedom, which is the...
Read more
Important

A return to decarbonised times is a path to scarcity, hunger, and poverty, where granite blocks instead of asphalt will be the least of...

By: Kavarna Hayek More expensive electricity and energy products are not (only) the result of the war in Ukraine but are part of the failed...
Read more
Columnists

Urška Klakočar Zupančič as a starlet on the red carpet

By: Davorin Kopše At the beginning, Mojca and I had some doubts about whether to go to the central national celebration on the occasion of...
Read more
Columnists

Something is rotten in “core Europe”

By: Dr. Matevž Tomšič One of the most worn out and the most misleading clichés found in modern political and media discourse on the old...
Read more

By A. S. Mass migration to Europe continues, with the number of migrants doubling this year compared to 2021, according to Remix News. On 14...
Read more
Migration

By UME Incredible and shocking scenes in connection with the border storm that has already taken place by thousands of African migrants on the Spanish...
Read more
Important

By Andrej Sekulović Although there are clear exceptions, such as Denmark, in most European countries the Social Democrats are the main initiators of mass migration....
Read more
Editors picks

Illegal crossings of border up by 75% in first five months

By: S.J., STA Slovenian police recorded 4,333 attempts at illegal crossing of the border in the first five months of the year, which is 75%...
Read more
Share
© © Nova obzorja d.o.o., 2021
Manage Cookie Consent
We use cookies to optimize our website and our service.
Manage options Manage services Manage vendors Read more about these purposes
View preferences
{title} {title} {title}
Go to mobile version