Opinion poll: The Vast Majority of Respondents Oppose Adoption of Marrakesh Declaration that Legalizes the Smuggling of Illegal Migrants 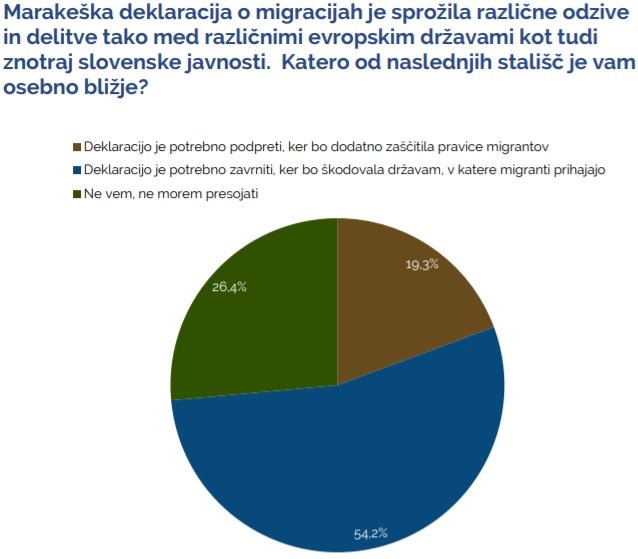 The majority of Slovenians who participated in Parsifal’s public opinion poll oppose the adoption of the Marrakesh Declaration and believe that Slovenia should reject it.

According to the results of the survey conducted by Parsifal for Nova24TV, most respondents believe that the Marrakesh Declaration should be rejected because it will harm the receiving countries. 54.2 percent of respondents agree with this claim.

The telephone and online survey was carried out by Parsifal for Nova24TV between 7 and 10 November 2018. The survey covered 706 respondents, of which 50.2 percent were women. The average age was 50.1 years. The majority of respondents, 34.3 percent, completed secondary school education. They are followed by those with completed higher education or more (26.7 percent), while 22.7 percent of respondents have a completed vocational school, and 16.3 percent of voters have completed elementary school or less.

Abroad, surprised by some presidential candidates

By: Tanja Brkić / Nova24tv.si It was not enough that Slovenia became the target of ridicule from the foreign media because of Golob’s statement about...
Read more
Important

By: Sara Kovač / Nova24tv.si The Slovenian Press Agency (STA) and Dnevnik newspaper jumped to the aid of the socialist plans of Golob’s government. The...
Read more
Columnists

It is difficult to publicly expose the sins of “ours”

By: Dr Matevž Tomšič This year’s parliamentary elections brought not only a change in power, but also a radically different attitude of the majority media...
Read more
Columnists

The paradox of an inflated bean at Kolodvorska Street 2

By: Jože Biščak First the left-wing routine, then the defiance of the new leadership, followed by complaining about their daily life as a journalist, and...
Read more

SDS with three referendums against the lunatics of Golob’s government

By: Vida Kocjan During the first hundred days of government, the government coalition was only successful in staffing. The trademark of this government is...
Read more
Focus

Why will a group of journalists from public RTV go on “strike”?

By: Tanja Brkić / Nova24TV.si As announced, tomorrow, Monday, there will be a day-long strike at RTV Slovenija, and there is no end to the...
Read more
Columnists

Jože Biščak at the meeting of supporters of Nova24TV and the magazine Demokracija: We must not resort to the sounds of silence!

Those in Golob’s government are masters, they are leading the country to ruin!

By: Vida Kocjan According to the amending proposal, the state budget deficit in the last four months of this year will amount to as much...
Read more
Share
© © Nova obzorja d.o.o., 2021
Manage Cookie Consent
We use cookies to optimize our website and our service.
Manage options Manage services Manage vendors Read more about these purposes
View preferences
{title} {title} {title}
Go to mobile version