Eurostat: Slovenia is more successful than most other European countries in the fall of GDB as well as maintaining jobs

According to Eurostat statistics, compared to other European countries, Slovenia is currently showing much better results in the category of job retention, despite constant attempts by the opposition to discredit the activities of the Janez Janša government. Both GDP and employment fell less than the EU and euro-area averages as a consequence of the crisis, indicating that the government responded in a timely and decisive manner to the crisis. In the last crisis 12 years ago, we were among the most affected countries, this time we are among those less affected.

Although the opposition, with the help of a monopoly over the Slovenian media market, constantly tries to give the impression that the Slovenian government is doing something worse or more authoritarian than other European countries, we are getting information day by day that the opposite is true.

According to the official statistical office of the EU, Eurostat, Slovenia, compared to other European countries, including “core” countries, is currently doing much better, especially in the category of job retention. The Prime Minister, Janez Janša, also responded to this with justifiably pride. 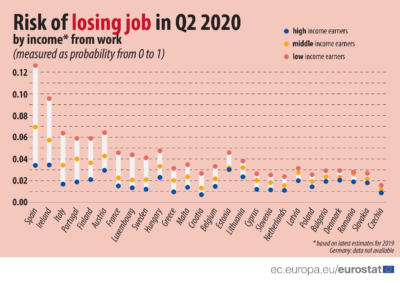 The effects of the pandemic on labour (Source: Eurostat)

Although statistics vary from country to country, on average, low-paid jobs, student work and work in general that do not require complex skills appear to be most at risk: 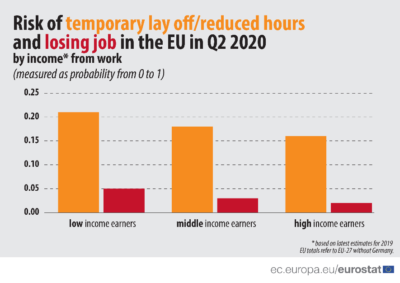 These statistics are extremely important for all governments, as they can be used to develop measures to reduce the impact of the pandemic on labour, earnings, poverty, and income inequality. Looking through the prism of income inequality and poverty, the average results in the EU are worrying, as they suggest that, as a result of the pandemic, the conditions of those who were previously “lagging behind” will deteriorate. This is the train on which all the countries of the world found themselves, and among the EU members, Slovenia is currently one of the countries where the effects are least known.

Timely and decisive response to the crisis

We also asked Matej Lahovnik, a Slovenian economist, former minister, and head of the advisory group of experts for mitigating economic consequences, to comment on Eurostat statistics. He told us that in Slovenia, on average, both GDP and employment fell less due to the crisis than in the EU and the euro-area, which shows that the government reacted to the crisis in a timely and decisive manner. In the last crisis 12 years ago, we were among the most affected countries, this time we are among those less affected. 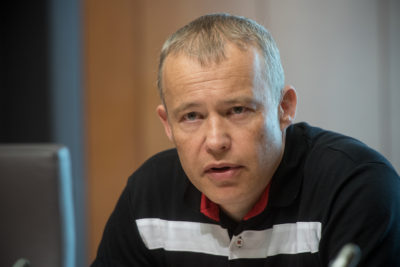 He added that due to timely anti-crisis measures, the Moody rating agency even raised its credit rating during this severe crisis, and Slovenia managed to issue and sell a 30-year bond at less than 0.5% interest rate. Demand for our bond has exceeded supply eight times, which means that capital markets also assess the government’s economic policy as credible.

By UME In Poland since Friday (03.10), high-ranking representatives of around 15 right-wing parties from various European countries have met to discuss a possible alliance...
Read more
Migration

By: P.T., STA A 31-year-old citizen of Bangladesh has been found dead in the Dragonja valley in the border area between Slovenia and Croatia with...
Read more
Slovenia

By: P. T., STA The government approved a EUR 9.8 million subsidy for a Li-ion battery plant that TAB, the Slovenian maker of starter and...
Read more
Slovenia

By: V4 Agency The enlargement of the European Union is the key to Europe’s future, Hungarian Minister of Justice Judit Varga said at an international...
Read more
Focus

Mateja Logar: Let’s behave responsibly towards ourselves and others

By: UKOM The head of the advisory group at the Ministry for Health, Mateja Logar, took part in the press conference on COVID 19. Current epidemiological...
Read more
Focus

By: UKOM The EU Network of National Rapporteurs and Equivalent Mechanisms against Trafficking in Human Beings (NREM) met today by videoconference, in the context of...
Read more
Focus

By: UKOM At friday's meeting of the Telecommunications Council, chaired by the Minister of Public Administration, Boštjan Koritnik, the EU ministers unanimously endorsed a general...
Read more