At the initiative of Prime Minister Janez Janša, the National and University Library (NUK) received a copy of the Dalmatinova Biblija (Dalmatin’ Bible) this week, which has so far been kept at Brdo Castle near Kranj. NUK has placed a copy of the Bible among other works of the collection of Protestant prints, which are among the library’s greatest treasures, the government said.

A copy of the Bible, translated and published in 1584 by Jurij Dalmatin, was taken over by the director of NUK Viljem Leban and the head of the Department of Protection and Restoration at NUK Andreja Kozjek, the government’s communication office announced today. 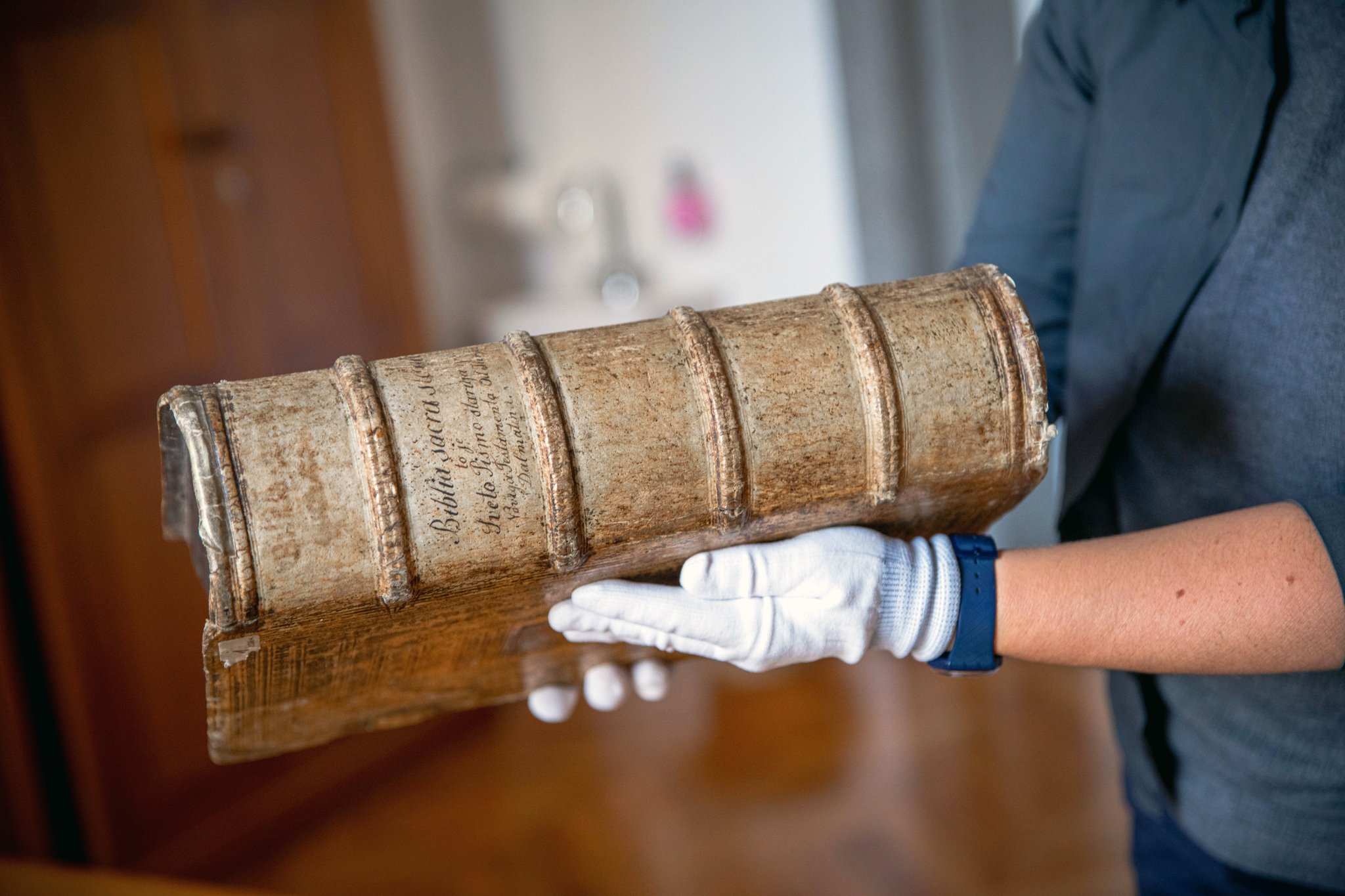 »The copy from Brdo is excellently preserved. It is bound in alum skin. It has a blindly imprinted portrait of Luther on the front cover and a portrait of Melanchthon on the back cover,« the government office said.

A copy of the Bible received by NUK was, according to the existing sources, originally owned by Baron Adam Egkh from Brdo Castle near Kranj. In this now protocol building, which in the past changed many owners, among whom were also Barons Zois, the Bible was probably kept right from its publication in 1584. In gratitude for the support of the Protestant provincial estates, it was received as a gift by Adam Egkh, grandson of Baron Janez Jožef Egkh, a friend of Trubar and a member of the commission that reviewed his works in order to determine whether they were in accordance with the Augsburg religion and whether they had been properly translated into Slovene. 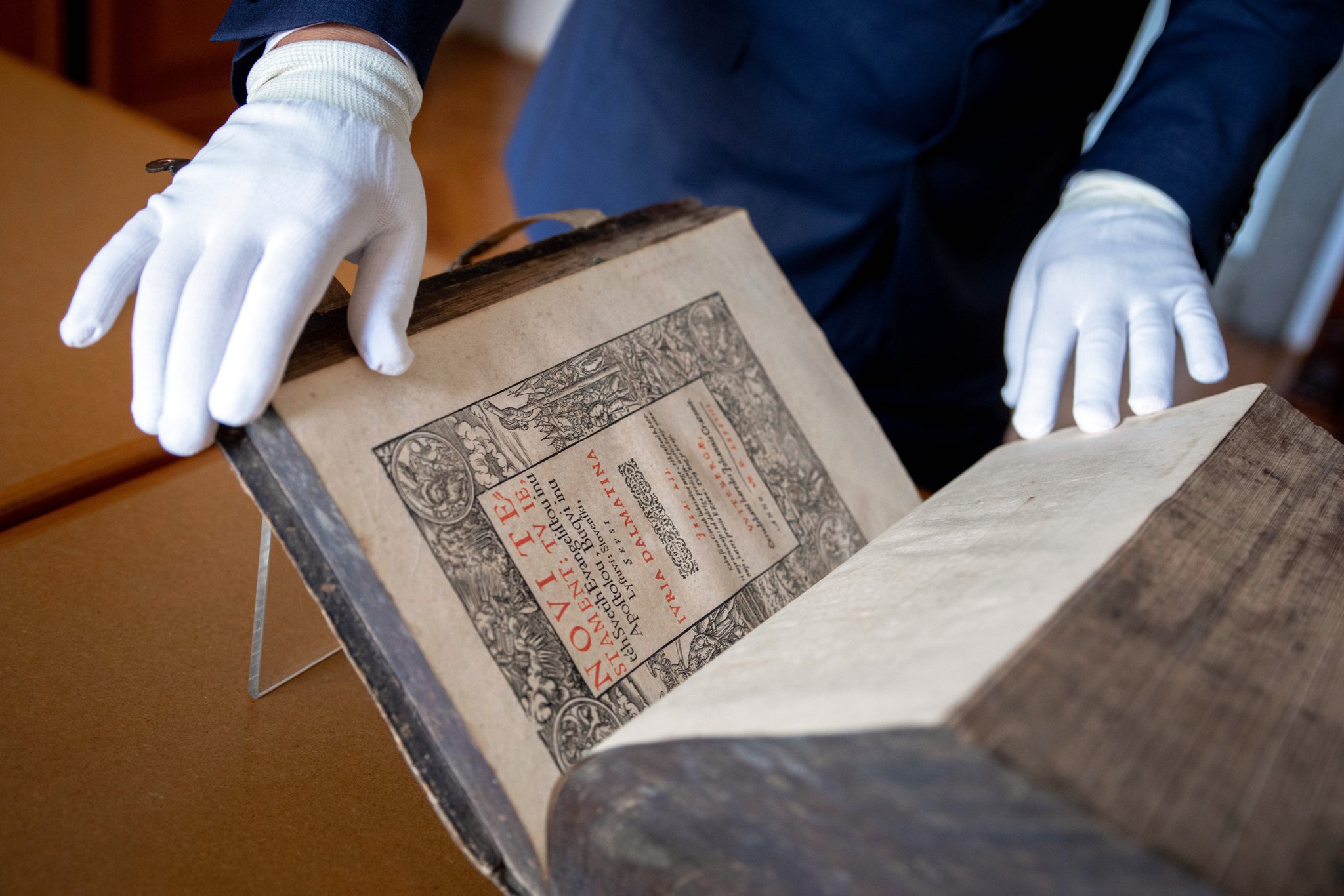 The government states that Slovene literature experienced its first great rise in the 16th century. »In a few decades, we have developed our language and laid the foundations of Slovenian literature,« they recalled, adding that Protestant works were published in relatively high editions, from 1,000 to 2,000 copies.

»The Bible, fully translated by Jurij Dalmatin, is one of the most important works of all our Protestant literature and has invaluable value for the Slovene language and culture,« they wrote. As they explained, it includes a short German and comprehensive Slovene preface, the entire Old and New Testaments, and several registers, including the linguistic one. 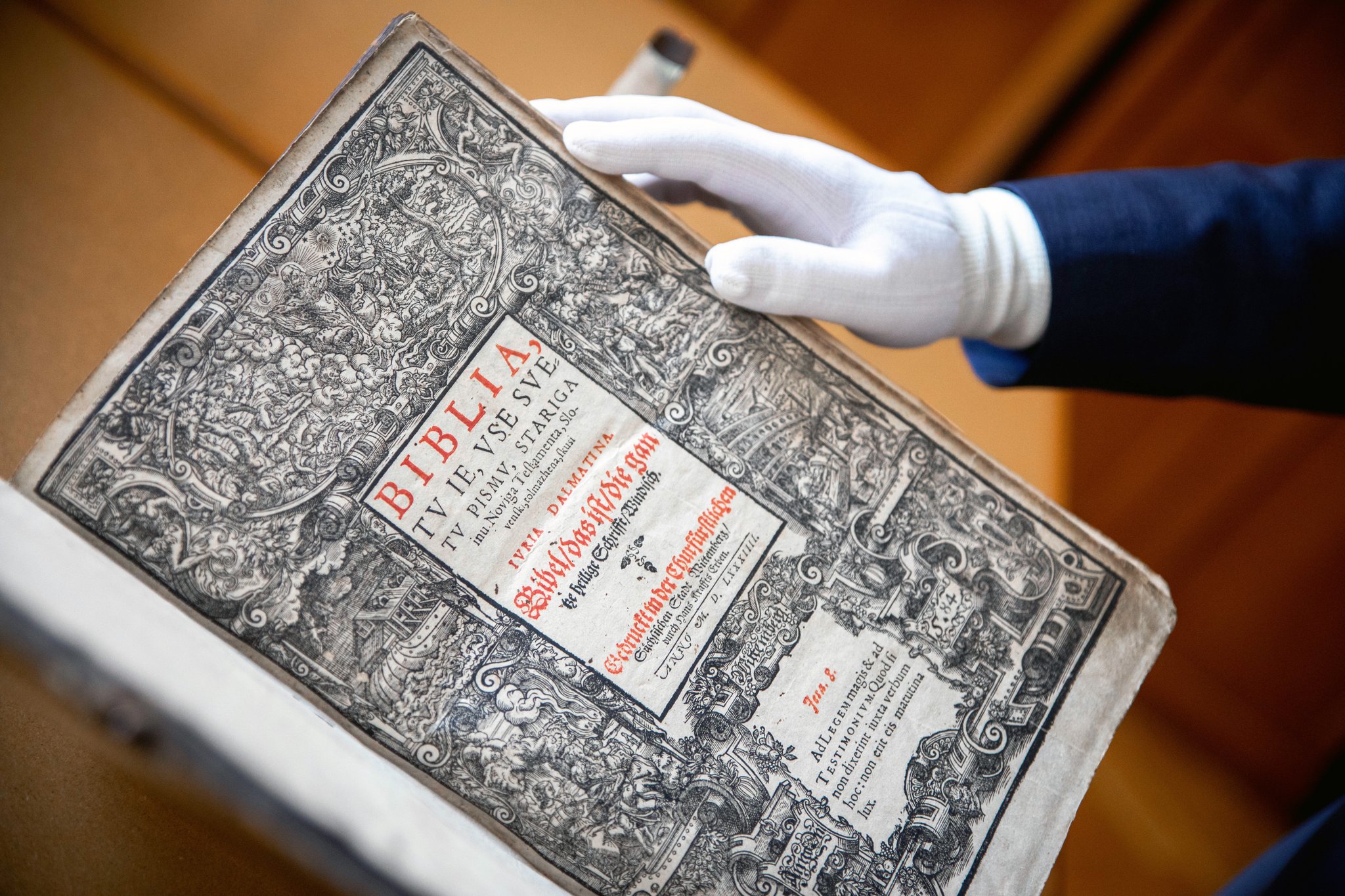 It was published only a few decades after Luther’s translation into German. It took the Dalmatian about 10 years to translate it. It was printed in Wittenberg, Germany in 1500 copies, and printing took about half a year. It was used for a further 200 years and was the foundation of all later translations of the Bible. A copy of the library of Leopold Maksimilijan Rasp has been available in digital form in the Digital Library of Slovenia since 2010, the government office added.

By: Andrej Žitnik / Nova24tv Slovene Members of the European Parliament that belong to socialist and liberal circles are a European anomaly. While the whole...
Read more
Important

By: Sara Bertoncelj / Nova24tv “This is the people’s initiative! This is the nation! It is time to unite and tell everyone that this is...
Read more
Columnists

Not just another Yugonostalgic with a hint of caviar

By: Jože Biščak Because of Miha Kordiš, the Levica party, if not the entire government coalition, should be slightly redder, than maybe how they...
Read more
Important

Second coalition summit: There is still no agreement on the announced reforms!

By: Ana Horvat /Nova24tv On Wednesday, the second reform coalition summit took place in Brdo pri Kranju. Although the agenda included the consideration of the...
Read more

By: Andrej Žitnik / Nova24tv Slovene Members of the European Parliament that belong to socialist and liberal circles are a European anomaly. While the whole...
Read more
Focus

By: Tanja Brkić / Nova24tv The Balkans have been shaken by a financial affair involving our Prime Minister Robert Golob and the Kosovo Ambassador to...
Read more
Focus

By: Sara Kovač / Nova24tv “The investigation is still ongoing, there are two foreign citizens being investigated, who are accused of espionage, and this is...
Read more
Focus

Slovenian Democratic Party: By Abusing Emergency Procedures, The Coalition Is Making It Impossible For The Opposition To Do Quality Work

By: Gal Kovač / Nova24tv “This week shows once again that Slovenia is in a state of emergency when it comes to its coalition. Extraordinary...
Read more
Share
© © Nova obzorja d.o.o., 2021
Manage Cookie Consent
We use cookies to optimize our website and our service.
Manage options Manage services Manage vendors Read more about these purposes
View preferences
{title} {title} {title}
Go to mobile version