The funeral service for the late British monarch Elizabeth II took place at Westminster Abbey in London on Monday. The ceremony was attended by members of the royal family and world leaders.

The Queen passed away on 8 September at Balmoral, the royal family’s summer residence in Scotland, after a long illness at the age of 96 and in the 71st year of her reign.

Last week, the Queen lay in state for four days in Westminster Hall, the oldest building in London’s Parliamentary estate, built in 1097. The Lying-in-State queue was open until early Monday morning UK time, and preliminary estimates suggest that the number of people who paid their respects at the coffin likely exceeded half a million. 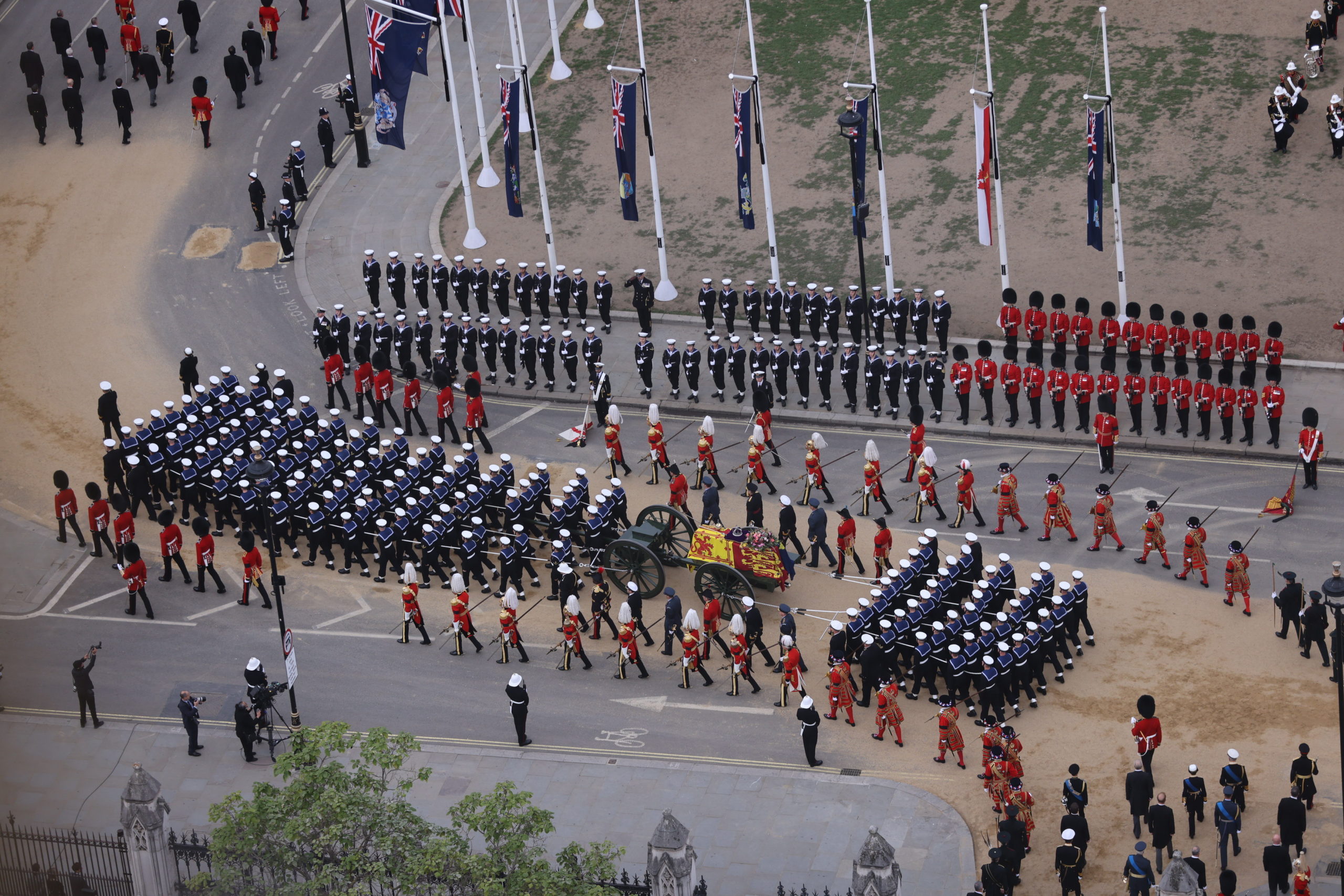 On Monday morning, the coffin was taken to Westminster Abbey, the historic coronation church of the British monarchy in London, 250 metres from Westminster Hall, and placed on a catafalque for the funeral service.

The late Queen’s coffin was draped with the Royal Standard, the flag of the British monarchy and royal house, and topped with the Imperial State Crown, which is set with 2,000 diamonds and is worn by British monarchs on the most prestigious state occasions, along with the crown jewels.

The coffin was moved from Westminster Hall to the Abbey on the state gun carriage towed by British Royal Navy sailors.

The slow procession was followed by Queen Elizabeth II’s first-born son and successor, King Charles III, accompanied by his siblings, Princess Anne, Prince Andrew of York and Edward, Earl of Wessex. They were followed in the procession by the King’s two sons, Prince William, Prince of Wales, heir to the throne, and Harry, Duke of Sussex, William’s younger brother.

A service lasting just over an hour was held at the abbey to honour and bid farewell to the late monarch.

The church is closely linked to the life of Queen Elizabeth II: on 20 November 1947, still as a princess, she was married here to Prince Philip – who died last April, in the 100th year of his life and 73rd year of their marriage – and was crowned here on 2 June 1953, almost a year and a half after her accession to the throne.

After the funeral service in Westminster Abbey, the naval gun carriage with the coffin of Queen Elizabeth II made its way in slow procession to the Wellington Arch, on the south-east corner of Hyde Park, about an hour’s walk away.

The procession was led by a regiment of the Royal Canadian Mounted Police. Canada is one of the 15 member states of the Commonwealth, which is largely made up of former British colonies, where the current British monarch is still the constitutionally recognised head of state.

From Hyde Park, the new State Hearse will take the coffin to Windsor, the royal family’s largest and oldest residence. On Monday evening in a private family ceremony, the late monarch will be laid to rest in the Royal Crypt of the Windsor Memorial Chapel, named after King George VI, the Queen’s late father who died in 1952.

The ceremony held in Westminster Abbey was attended by 2000 invited guests.

Among the guests were US President Joe Biden and his French counterpart Emmanuel Macron, along with the prime ministers of Commonwealth countries such as Justin Trudeau of Canada, Anthony Albanese of Australia and Jacinda Ardern of New Zealand.

After they paid respects while Queen Elizabeth II lay in state in Westminster, the French presidential couple attended a reception held by King Charles III in the Buckingham Palace on Sunday evening. The French president presented the British King with a 45-page photo album, which Mr Macron called a symbolic gift. The album features the photos taken during Her Majesty’s visits to France, featuring her with the French heads of states on those visits.

The first photograph was taken at a meeting between the late Queen and former French President Rene Coty in 1957. In addition, the album contains photos of the Queen with Charles De Gaulle, Georges Pompidou, Valery Giscard d’Estaing, Jacques Chirac, Nicolas Sarkozy, Francois Hollande and incumbent President Macron, among others.

The French head of state also shared a video montage on Twitter of the official programs of Queen Elizabeth II and the French presidents featured in the album.

Emmanuel Macron said that there is a long history of state visits by Queen Elizabeth II and Prince Charles in recent decades, and that it is important for the king to see.

The Queen visited France several times during her reign. Her last visit took place in 2014, when she visited Normandy for the 70th anniversary of D-Day. Charles III has also visited France several times as heir to the throne. Emmanuel Macron invited the new British monarch to France, but it is not yet known when and where the meeting will take place.

Germany: large-scale raids against a movement allegedly preparing for a coup d’état and the restoration of the German Empire

Will Celje experience a similar fate as the Austrian city of Graz? The latter went bankrupt within a year due to the far-left mayorship

By: Andrej Žitnik / Nova24tv.si In the second round of the mayoral elections in Celje, the young Matija Kovač defeated the favourite Bojan Šrot, and...
Read more
Important

The “liberation” of Slovenia according to Golob’s recipe continues: after the “depoliticisation” of RTV, it is now the NPU’s turn!

By: Ana Horvat / Nova24tv.si It seems that the leftists have invented a system to permanently cement the institutions they own, regardless of who is...
Read more
Columnists

By: Dr. Vinko Gorenak On July 29th, 2022, the Government of the Republic of Slovenia adopted a regulation on the protection of the Prime Minister...
Read more

Germany: large-scale raids against a movement allegedly preparing for a coup d’état and the restoration of the German Empire

Christmas Will Come Early For Media Tycoon Odlazek This Year: The Ministry Of Culture Will Once Again Reward Him Handsomely With A Media Tender

By: Andrej Žitnik / Nova24tv The Ministry of Culture’s annual media tender has in the past been an unofficial funding source for the leftists, where...
Read more
Focus

By: Gal Kovač / Nova24tv For all the concern that the government of Robert Golob expresses about the terrible situation in the property market, it...
Read more
Share
© © Nova obzorja d.o.o., 2021
Manage Cookie Consent
We use cookies to optimize our website and our service.
Manage options Manage services Manage vendors Read more about these purposes
View preferences
{title} {title} {title}
Go to mobile version