Tim Gajser takes the overall for the MXGP of Lommel with both moto wins and extends his Championship leader further. 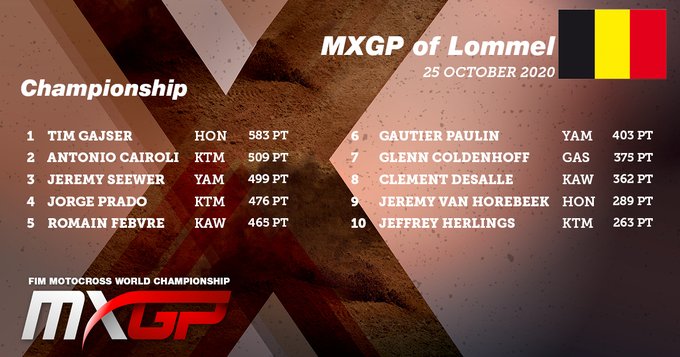 The slovenian was the owner of the holeshot, and was followed by Tonus, Febvre, Seewer and Van Horebeek. Cairoli fell at the start of the race but resumed the second race.

Seewer in the meanwhile went ahead of the race but Febvre also wanted to take the lead, attacked and successfully took first place, and so was the standings: Febvre, Seewer, Tonus, Van Horebeek, Gajser, Paulin and Desalle.

Gajser then made the fastest lap time, Febvre responded and then made another best lap, increasing the difference for Seewer for the 6s.

By: V4 Agency What happened in Brussels in terms of vaccine procurements followed the same pattern than in the case of migration. An unexpected situation...
Read more
Important

Committee 2015 (Human Rights Committee) addressed a letter to the President of the European Commission, Ursula von der Leyen, on media freedom and the...

By: Nina Žoher /Nova24tv Ever since the failed no-confidence vote against the government with the proposed candidate for prime minister, Karl Erjavec, it has been...
Read more
Columnists

The smart ones must not give up, because then fools and fanatics rule

By: Davorin Kopše The Easter holidays are behind us. This is the greatest Christian holiday when Christians celebrate Jesus’ resurrection from the dead. After the...
Read more
Migration

By: C.R. Croatian police have charged ten Croatian citizens with smuggling people from Bosnia and Herzegovina across Croatia to Slovenia. Between October last year and...
Read more

By: J.S.,STA Slovenia are out of the UEFA European Under-21 Championship with two losses and one draw, the second and decisive loss coming on Tuesday...
Read more
Sport

By: P.T., STA Slovenian basketball coach and former player Jure Zdovc will be inducted in the FIBA Hall of Fame as part of the 2020...
Read more
Sport

By: J.S, STA Nika Križnar won the overall Ski Jumping World Cup to secure the first ever Crystal Globe trophy in the discipline in the...
Read more